Gaming has become a pretty serious business for many, considering how big eSports competitions have grown. Even outside of tournaments though, many gamers are quite competitive and want the biggest possible advantages over the people they are facing.

This is one of the biggest reasons why budget monitors don’t just cut it anymore for a lot of gamers, as they want to see as many frames as possible for increased accuracy and response time.

With this in mind, we should technically be talking about the new 360Hz monitors, but unfortunately, they are so expensive that it would simply make more sense to talk about the 240Hz monitors which are slowly going mainstream as we speak.

That being said, one of the best 240Hz gaming monitors is the Asus VG279QM, which we will review today!

The Asus VG279QM is a 27 inch IPS panel that operates at 240Hz with a resolution of 1920×1080. It has 1x DisplayPort 1.2 and 2x HDMI 2.0 hubs which allow the monitor to be used with most setups, but to take full advantage we would encourage you to use the DP 1.2 cable included in the package.

The monitor also has 2 basic 2W speakers (and a headphone output) which could be fine for a YouTube video or some other simple task, but for gaming, we would recommend using your headphones.

The monitor also has OSD controls: a joystick and 4 buttons located at the bottom right side of the panel.

Although the Asus VG279QM gaming monitor is made entirely out of plastic, it by no means feels cheap. On the contrary, the build of the monitor feels solid and stable.

The stand of the monitor is capable of height, tilt, swivel, and any other type of adjustment possible, making this monitor fit well on your table no matter in what position you will use it. 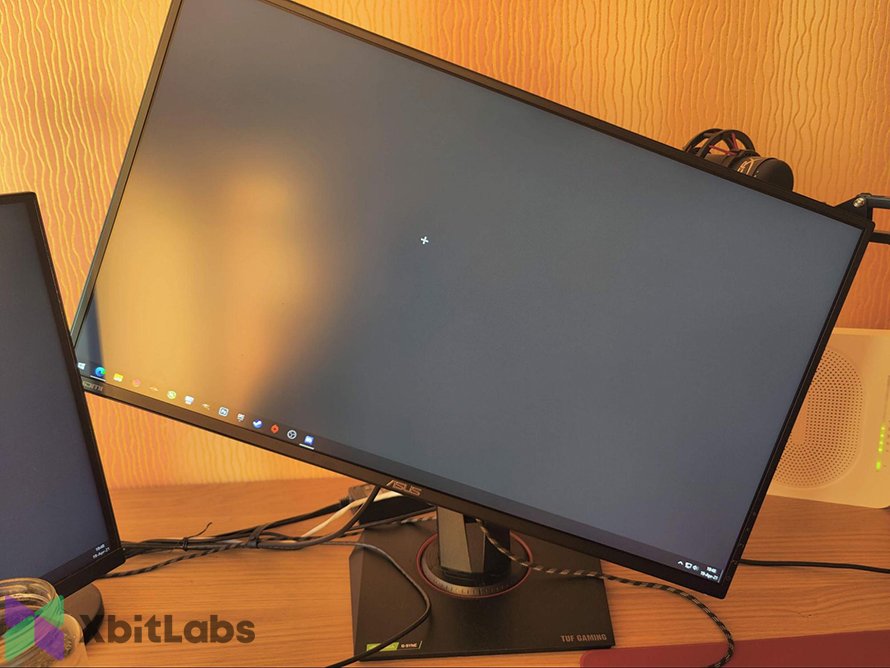 The screen is also Light Anti-glare coated providing clear images with no reflections even in a very well-lit room.

Overall you would be hard-pressed to find an aspect in which this monitor is lacking in terms of build quality.

The most important aspect of a monitor is majorly related to its capability to reproduce images and colors accurately. The Asus VG279QM does well in this department, as it is equipped with a well-tuned IPS panel that not only is fast but also color accurate.

The viewing angles on the monitor are once again excellent due to the IPS technology used, making it easy to discern what is being displayed on the monitor from a variety of angles.

There is no major backlight bleed but this could vary from panel to panel. From what most reviews have said about the Asus VG279QM though you should not worry about it much since most copies have had no issues.

With a little bit of calibration, the contrast rate of the panel can surpass 1000:1 which is a very good ratio. This type of performance can only be surpassed by VA panels in terms of contrast, but VA panels come with their own disadvantages.

The brightness range of the Asus monitor is also impressive with a fairly high peak brightness and a good overall range: 92-378 cd/m2. While talking about brightness and screen capabilities we should also mention that the screen has HDR support, but it should probably just be ignored.

The main reason for ignoring this somewhat interesting feature is the fact that the Asus VG279QM only supports HDR 400 which does not require local dimming, therefore, lacking the capability of increasing contrast or dynamic range.

The biggest selling point of the Asus VG279QM is of course it’s gaming capabilities and the fact that it can run at 240Hz and provide a smooth gaming experience when paired with capable hardware. 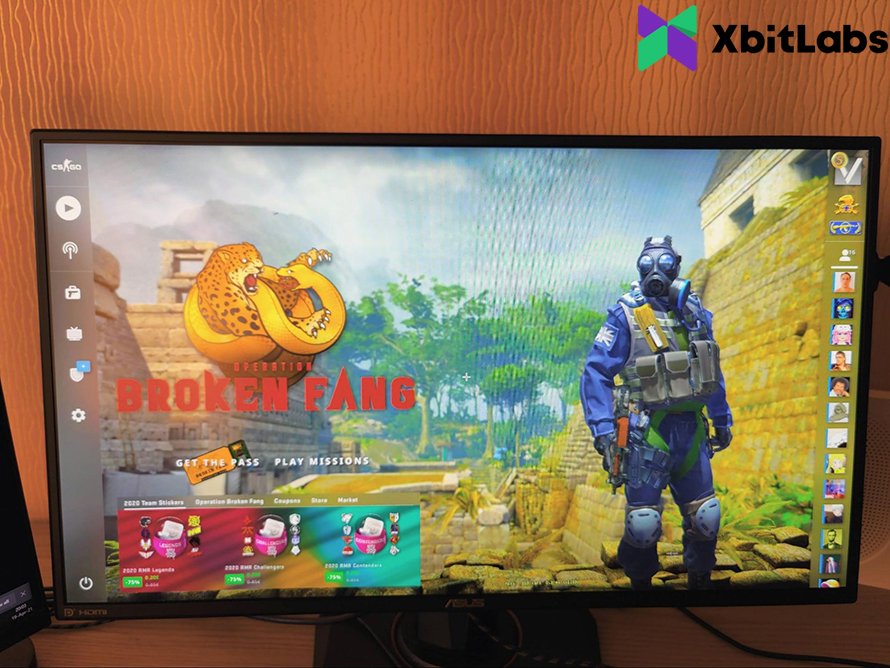 Besides the 240Hz, the Asus VG279QM also supports Adaptive-Sync, which means it supports both FreeSync and G-Sync, depending on the GPU you have in your PC. 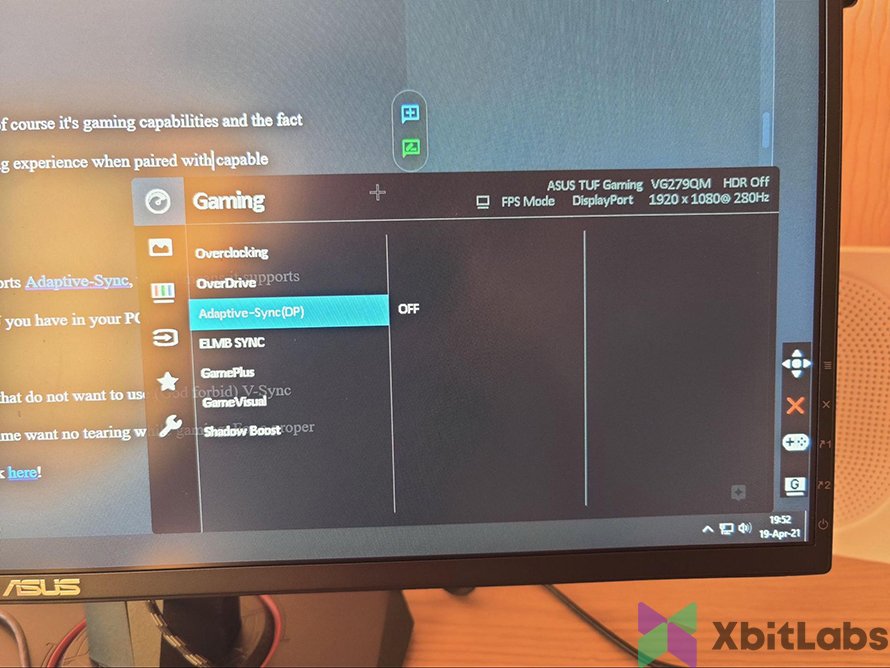 This special type of sync is important for gamers that do not want to use (God forbid) V-Sync which causes massive input lag, but at the same time want no tearing while gaming. For a proper G-Sync setup guide, we would advise you to look here!

Besides Adaptive-Sync, the Asus VG279QM has ELMB sync which provides motion clarity and no ghosting, but at the same time, it significantly reduces the brightness of the monitor. On the other hand, the good news is that you can use both Adaptive-Sync and ELMB-sync together on the Asus VG279QM gaming monitor! 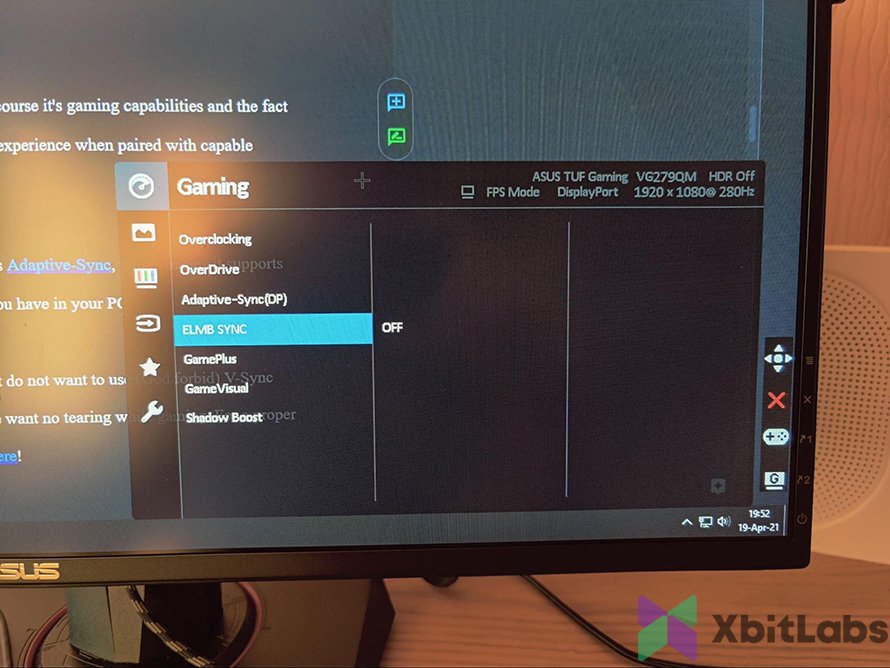 The bad news is that in reality as with many other monitors that include motion clarity tech the VG279QM has issues with strobe crosstalk and double images therefore the mode kind of fails at what it sets out to do. Moreover, most competitive gamers do not use Adaptive-Sync since it adds a certain level of input lag.

The biggest advantage this monitor offers for gaming is of course the response times which are very good and offer a very snappy and responsive experience with minimal input lag. To achieve the most optimal performance on the VG279QM you must make good use of the Overdrive setting in the OSD which lowers the response times of the monitor.

After consulting with different sources we have found that if you will run the monitor at 240/280Hz the optimal overdrive level is 80. This will allow you to achieve a 3.6-3.8ms response time which is extremely good for gaming. 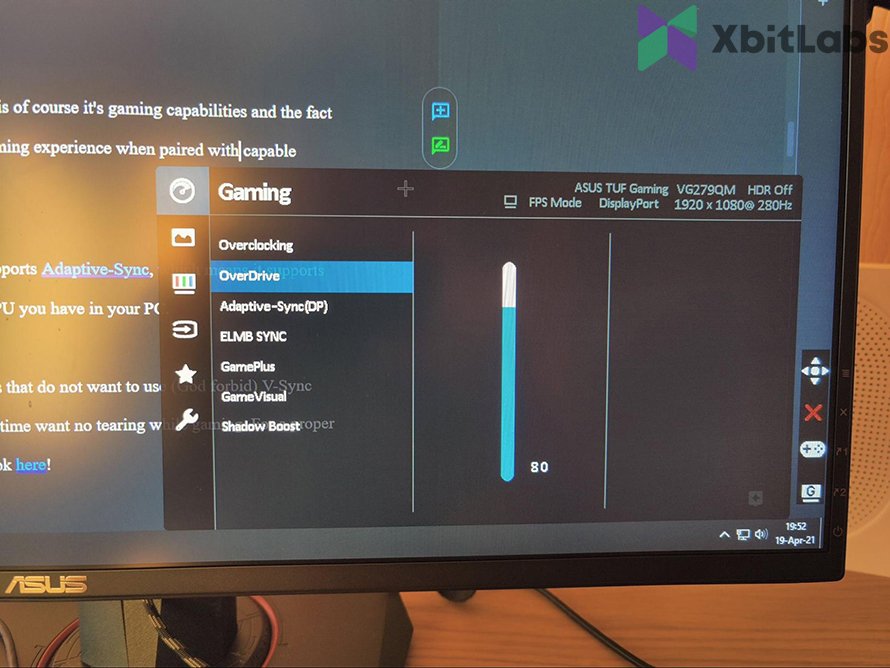 For lower refresh rates, however (144-200Hz) we would recommend using Overdrive 60 for better image quality.

Unfortunately, to achieve the advertised 1ms response time as with all other monitors you would have to set the Overdrive level to 100. This will indeed produce a 0.92ms but at the same time, there will be severe overshoot making the mode unusable.

Overall for maximum gaming performance with the lowest possible input lag/response times, we would recommend: Adaptive-Sync off, ELMB off, overclocked display to 280Hz, Overdrive mode set to 80 (60 if you are playing games where you cannot reach 200FPS).

The biggest advantage of the Asus VG279QM gaming monitor and one of its major selling points is the fact that the screen is capable of overclocking to 280Hz straight from the OSD panel. 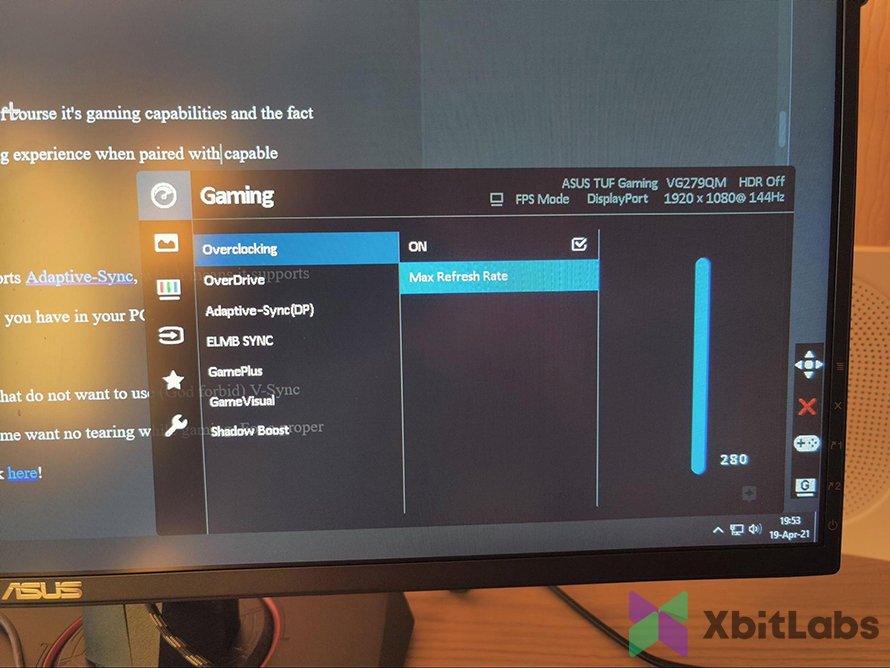 This is not as big of a jump as with going for 360Hz, but it is still 40Hz over normal 240Hz monitors, which does improve motion clarity and smoothness to a certain degree.

As mentioned previously to make full use of the 280Hz you should set the Overdrive level to 80 for the lowest possible input lag without overshoot.

Overall if you are sensitive to motion on your screen you will notice a slightly better image with better image quality at 280Hz. The biggest concern here is the fact that you will need capable hardware to run the game at 280FPS or above so you could take advantage of the super high Hz.

When enabling the overclock in the OSD, the menu will give you a warning about possible flashing because of the OC, but overall during gaming and even in the frame skipping test there were absolutely no issues with the panel running at 280Hz. 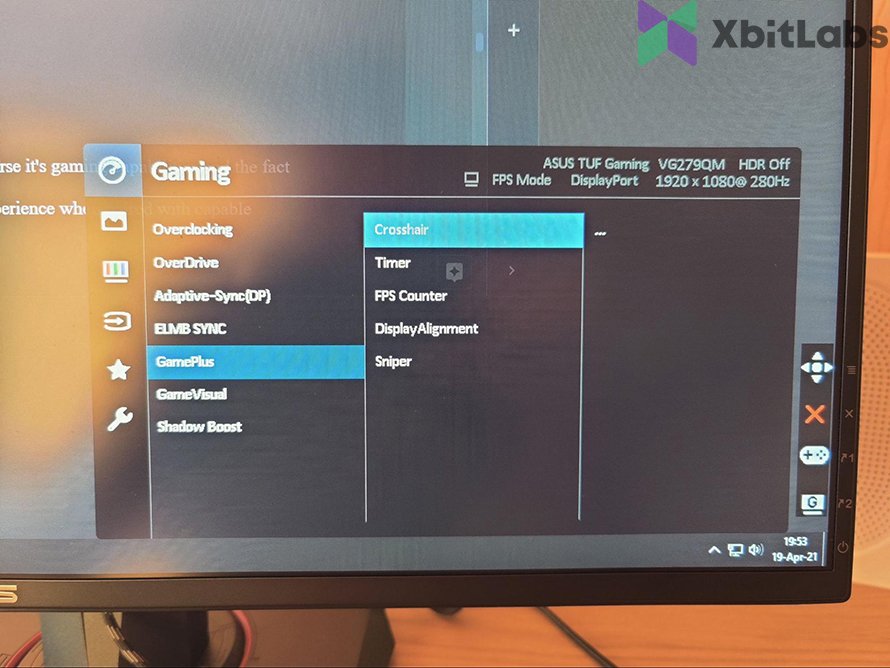 GameVisual comes with a couple of preset color modes for different types of games. From our testing, the FPS mode seems to offer the most vibrant colors which are desirable in gaming. 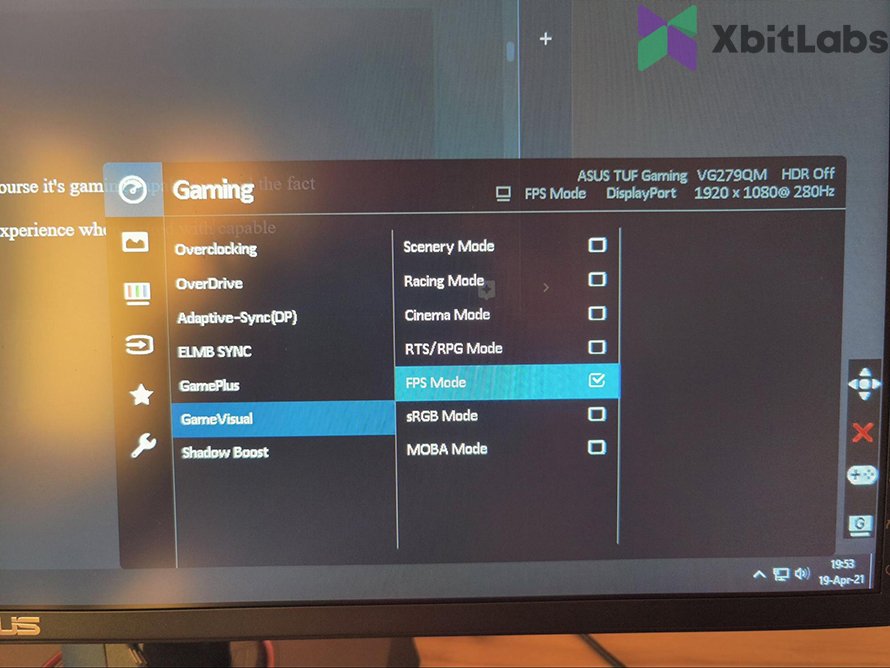 Shadow Boost is as the name suggests a way to increase brightness in darker games. Unfortunately, the side effect of this setting is washed-out colors so we would not really recommend using it. 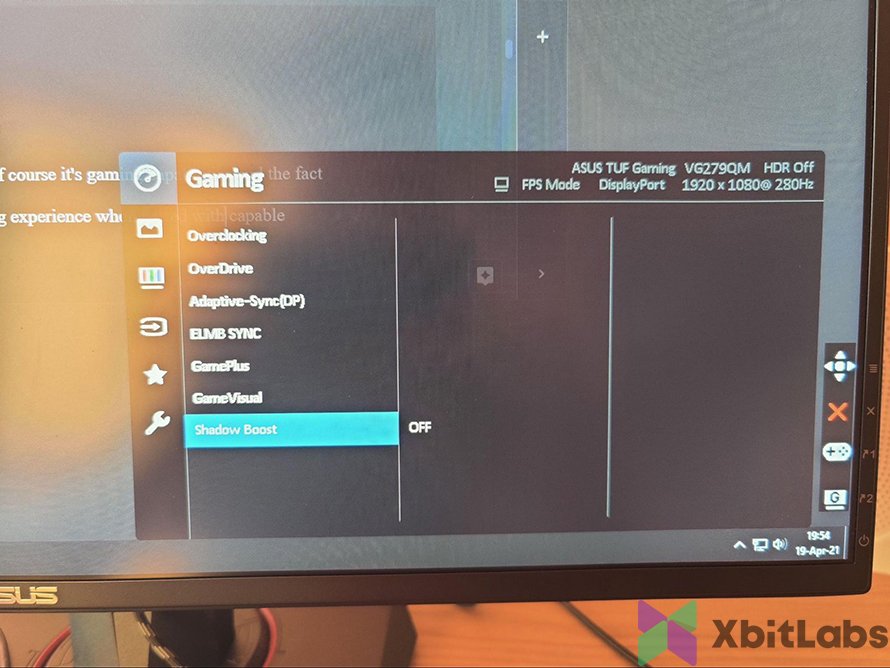 Asus did well in this department and it really does feel like you are getting some nice little add-ons for the money you are paying.

The only issue we could find with the Asus VG279QM gaming monitor is the pricing. The monitor will cost around 380$/€ which is a significant amount of money. At the same time, we do feel that you are indeed paying for what you are getting and although expensive the VG279QM delivers superb performance.

So what are our conclusions regarding the monitor? The Asus VG279QM is a monitor well suited for competitive gamers that want great features, low response times, and great screen quality (color accuracy, viewing angles, backlight bleed, etc).

If you are in the market for a 240Hz monitor and have the budget, we would highly recommend you look at the Asus VG279QM for its great overall package!

The Asus VG279QM is a stunning gaming monitor that offers very low response times and has the capability to overclock to 280Hz easily. The panel boasts good color accuracy and brightness and is capable of G-Sync and ELMB-sync concurrently. If you are in the market for a very responsive monitor with low input-lag then the VG279QM is the monitor for you!

How to Add More USB Ports to Your PC or Laptop

Standardization is great because it eliminates the need to have multiple adapters, cables, dongles and ports, for devices which could all use the same type of port, which is why USB is great, or rather, why it could be. Even with USB, there are different types, namely type A, B and C, and even they […]

What is USB4? – Everything You Need to Know

As technology progresses, we get new iterations of already existing standards, such as USB. The current version of USB, namely USB4 or USB 4 if you ask the internet, is a cut above the previous version. With faster transfer speeds as one of the improvements, USB4 already has more up its sleeve. Unfortunately, USB4 followed […]

Using external storage is something familiar to us. However, companies in charge of standardization can make a mess out of naming schemes and add confusion instead of making their products easier to understand for everyone. USB is one of those industry standards that has become more confusing over the years. The notion of USB 3.0 […]