The evolutionary Hyper 212 model now boasts new base with improved heatpipes direct-touch technology and a new fan. The cooler has also become a little pricier. Let’s find out how successful these improvements turned out to be.

Released back in 2007, Cooler Master’s CPU cooler Hyper 212 was a successful product with a highly attractive price/performance ratio. About two years later, in the fall of 2009, the company introduced the revised Hyper 212 Plus with direct-touch technology and broader support for different PC platforms. In about two years more, Cooler Master came up with a third version of Hyper 212 called EVO. The newest Hyper 212 cooler features a more advanced fan and an improved implementation of direct-touch technology. That’s the product we are going to talk about in this review. 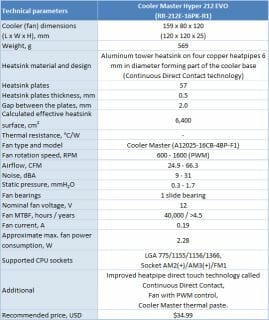 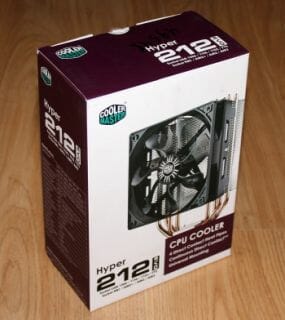 The cooler’s photo and model name on the front side of the box are supplemented with technical information on the other sides. The specifications are very detailed:

The drawing with the cooler’s dimensions may be handy for some users.

The cooler is additionally packed into a plastic wrap that protects it against any hazards. You will also find a pack of accessories in the box: 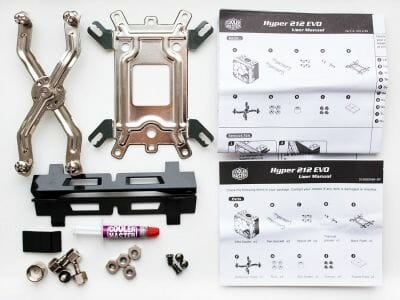 These include an X-shaped pressure plate, a back-plate, two plastic details for installing a second fan, Cooler Master’s thermal grease, screws, nuts and bushings, and an installation guide.

The Cooler Master 212 EVO is manufactured in China. Its retail price is about $35, which is $5-7 higher than the price of the Hyper 212 Plus. The product comes with a 2-year warranty.

The only visible difference of the Hyper 212 EVO from the Hyper 212 Plus is the more advanced fan which goes under the name of Cooler Master Xtra Flo: 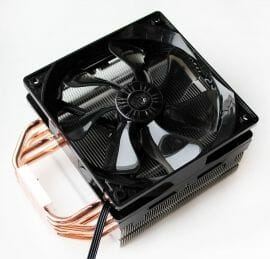 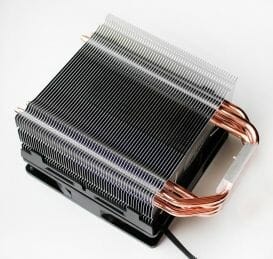 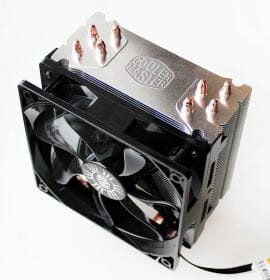 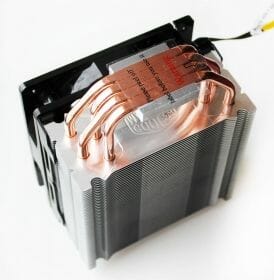 The cooler’s dimensions have not changed. It still measures 159 x 80 x 120 millimeters.

But its weight has been reduced by 57 grams to 569 grams. This is due to the lighter fan (104 rather than 166 grams) as well as minor changes in the design of the cooler’s base. The overall design hasn’t changed, though. The heatsink still consists of 57 aluminum plates with a thickness of 0.5 millimeters that are press-fitted onto four copper heat pipes, 6 millimeters in diameter. The fins are placed 2 millimeters apart from each other. 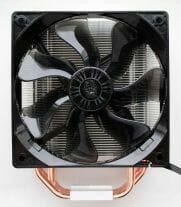 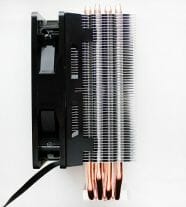 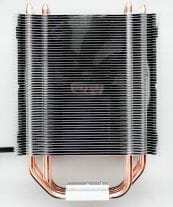 A 120mm fan is attached to one side of the heatsink. 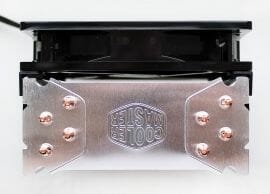 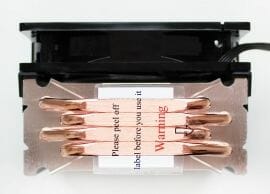 The total size of the heatsink surface is about 6400 sq. centimeters. The heat pipes are placed in a checkerboard pattern in order to distribute the heat uniformly in the heatsink fins. 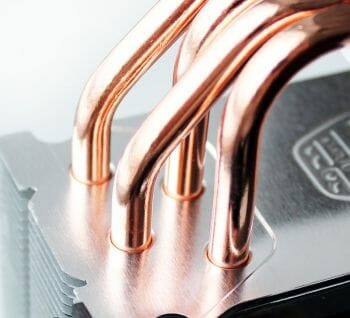 The manufacturer claims that this heatsink design is efficient both at low and high speeds of the fan. The product also features a universal fastening mechanism and an original fan. You can attach a second fan to it. 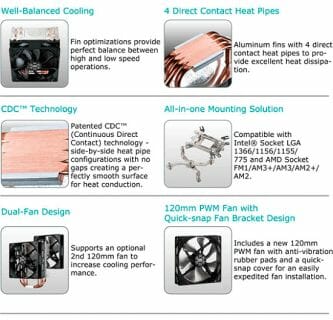 For us, the key feature of the Hyper 212 EVO is its direct-touch technology: 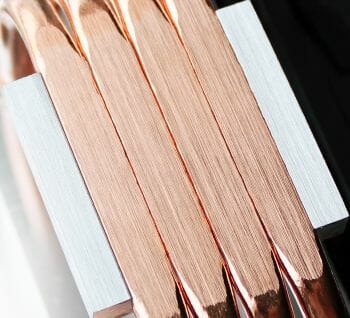 There are no aluminum inserts in between the copper heat pipes, which ensures better removal of heat from the processor. Cooler Master refers to this as Continuous Direct Contact. 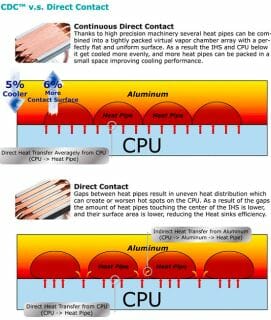 As you can see, the new technology is supposed to ensure 5% lower temperature and 6% larger contact zone. The reduction of the dead zones in between the heat pipes should indeed lead to higher efficiency. The cooler’s base is flat but not finished perfectly. 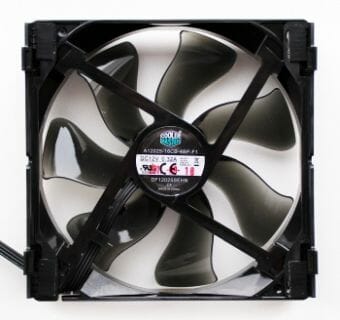 We saw a fan with the same impeller in our recent test of Cooler Master’s Hyper 612S. Its rotation speed is PWM-regulated from 600 to 1600 RPM at a noise level of 9 to 31 dBA, air flow of 24.9 to 66.3 CFM and static pressure of 0.3 to 1.7 millimeters of water. Its sleeve bearing is expected to serve for 40,000 hours (or 4.5 years) continuously. The peak power consumption of the fan is 2.28 watts. According to our measurements, it consumed 3.2 watts and could start up at a voltage of 3.8 volts. The fan is secured on the heatsink with two plastic details that are locked on the side slits in the heatsinks. There is another pair of such details in the box so that you could attach a second fan if you want to.

The installation procedure isn’t any different from installing most other CPU coolers from Cooler Master. First you insert threaded bushings into the mainboard’s mounting holes and fix them on the reverse side of the mainboard with nuts through a back-plate. 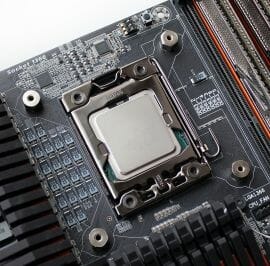 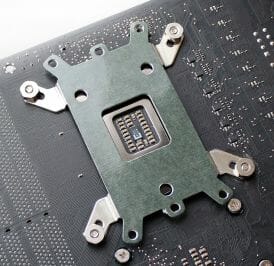 Then you apply some thermal grease, put the cooler down on the CPU and tighten it with an X-shaped plate that has spring-loaded screws. 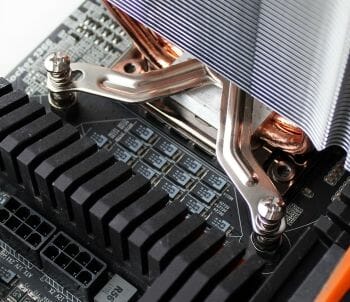 It’s easier to do this without a fan. You can attach the latter after the cooler is mounted on the CPU. The fastening mechanism is very strong. The Hyper 212 EVO does not turn around or shift on the CPU heat-spreader whereas the back-plate prevents the mainboard from bending. 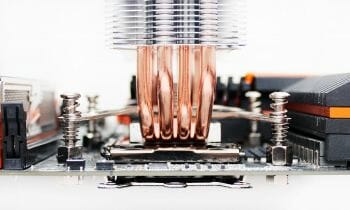 Cooler Master doesn’t take much space inside the system case. The next photo shows it installed: 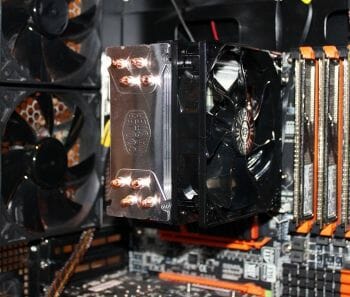 The distance from the cooler’s bottom edge to the mainboard is a generous 44 millimeters. The cooler is narrow and does not cover the mainboard’s memory slots.

We performed all cooler tests inside a closed system case. Here is our testbed configuration:

We overclocked our six-core processor (with its default non-lapped heat-spreader) with the multiplier set at 25x and “Load-Line Calibration” (Level 2) enabled to 4.3 GHz. The nominal processor Vcore was increased to 1.3875 V in the mainboard BIOS: 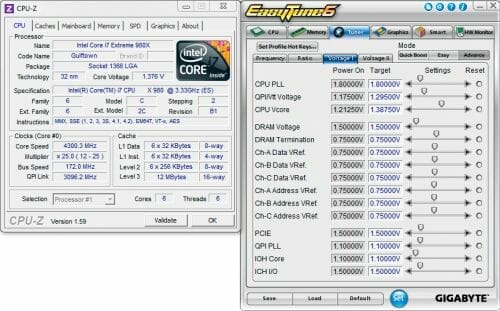 Turbo Boost and Hyper-Threading technologies were disabled during our test session. The memory voltage was at 1.5 V and its frequency was 1.38 GHz with 7-7-7-16_1T timings (Extreme profile). All other parameters available in the mainboard BIOS and related to CPU or memory overclocking remained unchanged.

All tests were performed under Windows 7 Ultimate x64 SP1 operating system. We used the following software during our test session:

So, the complete screenshot during the test session looks as follows: 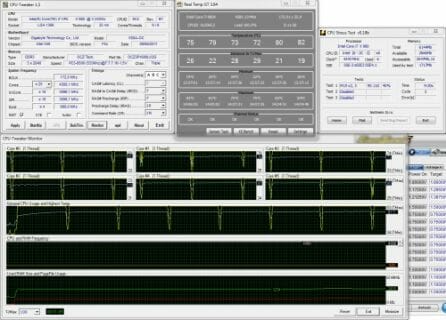 The CPU was loaded with two consecutive CST test runs with the settings as indicated above. The stabilization period for the CPU temperature between the two test cycles was about 8-10 minutes. We took the maximum temperature of the hottest CPU core for the results charts. Moreover, we will also provide a table with the temperature readings for all cores including their average values. The ambient temperature was checked next to the system case with an electronic thermometer with 0.1 °C precision that allows hourly monitoring of the temperature changes over the past 6 hours. The room temperature during our test session varied between 24.5-24.7°C.

The noise level of each cooler was measured between 1:00 and 3:00 AM in a closed room about 20 m2 big using CENTER-321 electronic noise meter. The noise level for each cooler was tested outside the system case when the only noise sources in the lab were the cooler and its fan. The noise meter was installed on a tripod and was always at a 150 mm distance from the cooler fan rotor. The tested cooling systems were placed at the edge of the desk on a sheet of polyurethane foam. The lowest noise reading our noise meter device can register is 29.8 dBA and the subjectively comfortable noise level in these testing conditions was around 36 dBA (do not mix it up with low noise level). The fan(s) rotation speed was adjusted in the entire supported range using our in-house controller by changing the voltage with 0.5 V increment.

We are going to compare Cooler Master Hyper 212 EVO against a cooler from Thermalright with almost the same retail price – Thermalright True Spirit ($29.95) tested with one default fan: 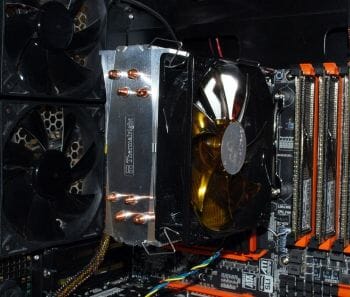 The test results of the Cooler Master Hyper 212 EVO and its opponent can be viewed in this table as well as in the diagram below (sorted in the order of descending efficiency): 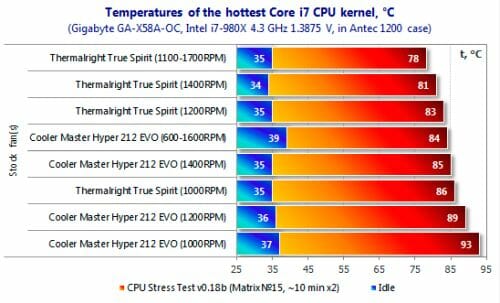 With their fans being PWM-regulated, the Thermalright True Spirit turns out to be more efficient than the new Cooler Master Hyper 212 EVO by 6°C. This is quite a lot, especially as the True Spirit is also cheaper. Thermalright’s cooler is also superior at the same speed of the fan: by 7°C at 1000 RPM, by 6°C at 1200 RPM and by 4°C at 1400 RPM. Thus, the Hyper 212 EVO is inferior to the True Spirit in efficiency in every test.

We also tested both coolers with two fans each but could see no difference except that the peak temperature of our six-core CPU was lower by 2-4°C, depending on the speed of the fans. So, let’s move on to the noisiness test.

We measured the amount of noise produced by the coolers throughout the speed range of their fans. You can view the results in the following diagram: 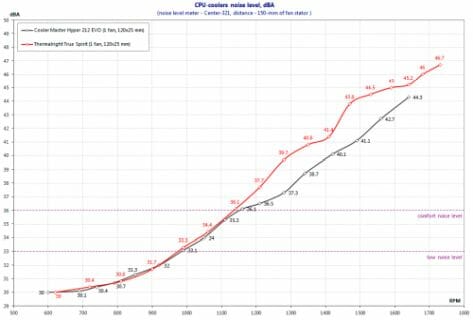 The Xtra Flo fan of the Cooler Master Hyper 212 EVO does well in this test. Its sleeve bearing works quietly, its noise increasing proportionally to its speed. There were no unwanted additional sounds typical of CPU coolers, so the Xtra Flo does not irritate your ear even at maximum speed, even though you can hardly want to run it at that speed continuously.

The Hyper 212 EVO is equal to the Thermalright True Spirit at the silent and comfortable noise levels but the latter is noisier at high speeds.

The new Cooler Master Hyper 212 EVO doesn’t set any performance records, but it is not actually supposed to. Considering its price, it is only meant for moderately overclocked CPUs. And the Hyper 212 EVO meets this purpose well enough, coping with our six-core CPU overclocked to 4.3 GHz, even though turning out to be inferior to the cheaper Thermalright True Spirit. Anyway, if you don’t find the latter product in shops, the Hyper 212 EVO can make a worthy alternative.

Besides its good performance, the new cooler features broad compatibility, has a simple and reliable fastening mechanism, does not block memory slots and has no conflicts with large heatsinks on a mainboard’s power circuit components. It comes with a pretty fan and allows installing a second one. So, it’s a good, although not exceptional, cooler which might have come at a lower price.