We have just reviewed the top liquid-cooling products from Corsair. Today time has come to check out another system, which is one step below the flagship solution in the positioning charts.

Less than a week ago we introduced to you a new liquid-cooling system from Corsair that belongs to the Hydro Series – Corsair H100. At that time, this system made a very good impression even despite the high level of generated noise and demonstrated superb cooling efficiency. As we know, Corsair launched two liquid-cooling system modifications: the flagship H100 and a less expensive H80. For as little as $80 (which is $20 cheaper than they ask for H100), you will get a slightly more compact radiator, which will guarantee better compatibility with computer cases. At the same time, according to Corsair, H80 should be only 2°C behind the H100 leader under maximum load. It seems like a really tiny difference. So, today we are going to take a closer look at Corsair H80 and find out if its cooling efficiency is exactly as good as promised.

The cardboard box is designed in the same style as the one from Corsair H100, but you will never take one for another, because of different box size and the model name written on the front of the box in very large letters: 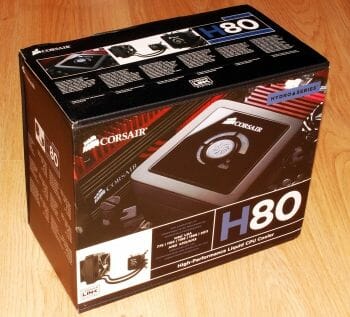 The information on the back and the sides of the package is the same as on H100 box, except for the technical specifications: 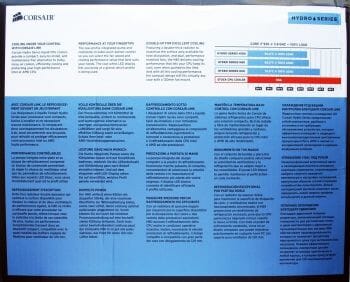 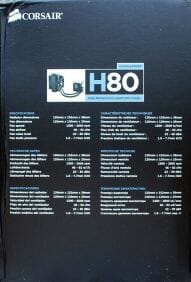 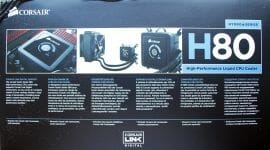 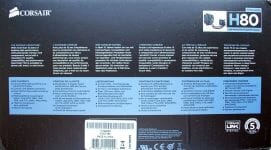 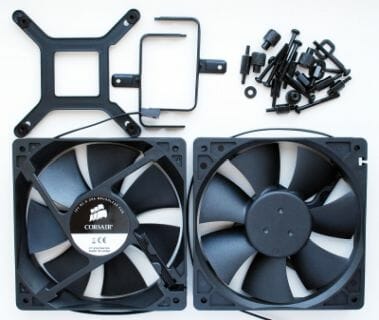 The cooling system is made in China (H100 is made in Taiwan). It comes with 5-year warranty and retails for $80, as we have already mentioned above.

In fact, the design of Corsair H80 doesn’t differ too greatly from the flagship H100 system. It is a compact liquid-cooling system where a water block is combined into a single unit with a pump and is connected to the radiator with tubes: 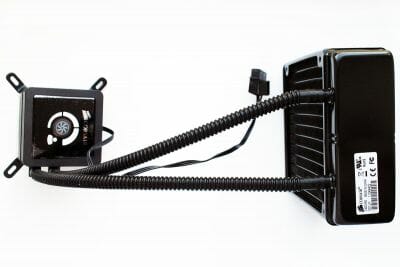 There is only one key difference – the radiator.

It is 152x120x45 mm big compared with 275x120x25 mm by H100. In other words, Corsair engineers simply replaced a long and thin aluminum radiator with a short and thick one, having retained the same effective surface size.

At the same time the design of the radiator didn’t change at all. It consists of 12 thin heatpipes filled with coolant and aluminum band creating a comb-like structure.

The actual “working” part of the radiator is 38 mm thick, which is 20 mm more than by H100 (18 mm). This allows us to assume that the radiator fins are a little larger by H80 model than they are by H100. Everything else is the same.

The water block and pump unit has minimal differences from the same unit on the Corsair H100. It has two four-pin connectors for additional power, instead of four connectors on the H100: 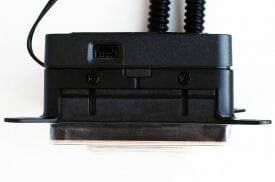 The rest of the features and the Corsair Link connector are again exactly the same. 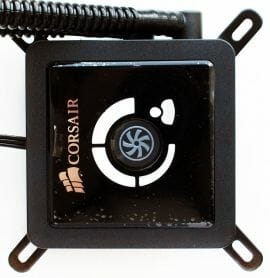 Although our particular unit the top decorative cover and the soft pad underneath it were detached from the pump for some reason: 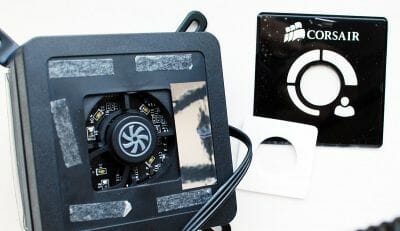 The copper base surface has a layer of viscous gray thermal paste.

A thin layer of evenly applied thermal paste combined with exceptionally even surface of the water block base produced the following imprints on our LGA1366 processor: 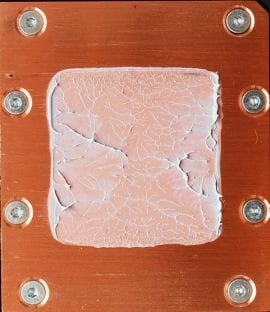 The system compatibility and installation are exactly the same as with Corsair H100. The only difference is that Corsair H80 will require only one spot for a 120 mm fan inside your system case. This way, we can conclude that Corsair H80 is more universal than H100 after all. This is what it is going to look like inside the system case: 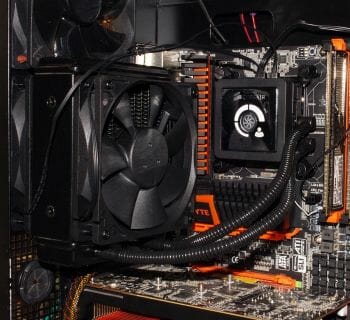 I would like to remind you that Corsair H80 comes already filled with coolant and sealed, which should allow you to use it problem-free for up to 5 years, according to the manufacturer. H80 comes with the same exact fans as H100, with the same exact rotation speed adjustment system, so we won’t dwell on these details here again. 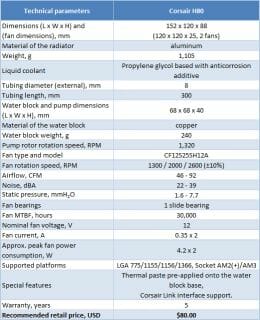 The testing methodology and testbed configuration were exactly the same as with Corsair H100 reviewed recently. Just to sum up the main details I would like to repeat that the room temperature at the time of tests was 24.5-24.8°C. We ran all tested inside a closed Antec Twelve Hundred system case with good internal air flow. Since at minimal fan rotation speed Corsair H80 couldn’t cope with the CPU overclocked to the same level as under Corsair H100 (4.375 GHz, 1.41875 V), we ended up overclocking our six-core processor only to 4.3 GHz with 1.39375 V Vcore. Therefore, we also tested the H100 system in the same mode for comparison purposes. As usual, we added the results of our reference air cooler – Thermalright Archon, as well.

I would also like to add that besides three default fan modes supported by Corsair H80, we also tested this system in the entire rotation speed range of its fans with 200 RPM increments (±10 RPM). We used our special in-house controller to adjust the speed. 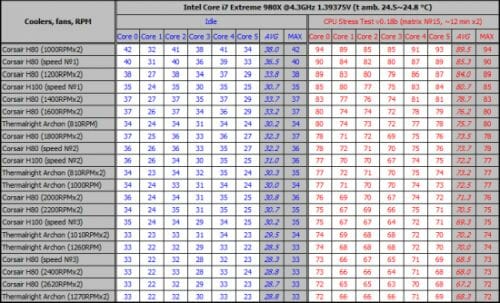 Corsair H80 behaves as a compact liquid-cooling system should. We clearly see that the cooling efficiency depends significantly on the rotation speed of the radiator fans and the extent of the radiator cooling. We see the highest cooling efficiency increase in the interval from 1000 to 1600 RPM, where the maximum temperature of the hottest processor core drops 14°C. In the interval from 1600 to 2200 RPM the temperature drops another 5°C, and at 2200 RPM and higher rotation speeds – by only 3°C more. The temperatures in the three preset rotation speed modes are practically the same as declared in the official specifications.

The competition between the two Corsair systems turned out pretty interesting. At the first fan speed setting H100 wins 5°C from the less expensive counterpart, which is not surprising because its thinner radiator is easier to cool than a thicker radiator of the H80, even with two fans on the latter. At the same time, when we get to the second fan rotation speed setting, H80 catches up and the difference lowers to only 1°C, while at the third fan speed setting the junior Corsair H80 manages to get 2°C ahead. It means that the cooling efficiency of Corsair H80 is even more dependent on the fan rotation speed than H100. Moreover, as we remember from our previous review, H100 may accommodate two additional fans, which will boost its cooling efficiency up to the level of Thermalright Archon, and the same trick won’t work on H80.

I can’t help mentioning that Corsair H80 is defeated by the best air cooler, and this defeat is overwhelming. Thermalright Archon with a single TY-140 fan at 810 RPM is as efficient as Corsair H80 with both its 120 mm fans rotating at 1600 RPM. At the still very quiet speed of 1000 RPM on Archon cooler, it competes with H80 at 2000 RPM of both its fans, and so on and so forth.

Nevertheless, we additionally tested Corsair H80 for further overclocking of our six-core CPU and learned that at 1650 RPM fan speed this system can have the CPU working stably at 4.45 GHz with 1.45625 V core voltage and 92°C peak core temperature: 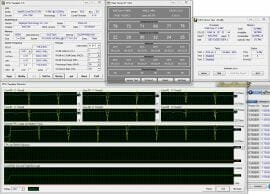 There is another piece of evidence that the cooling efficiency of this liquid-cooling system is highly dependent on the radiator: when the CPU is overclocked to the same heights but the fan rotation speed is 2600 RPM, the CPU temperature is 12°C lower with 80°C being the peak temp. By the way, Thermalright Archon with two TY-140 fans at 1280 RPM doesn’t let the CPU temperature exceed 83°C while it is overclocked to the same speed and with the same core voltage setting. 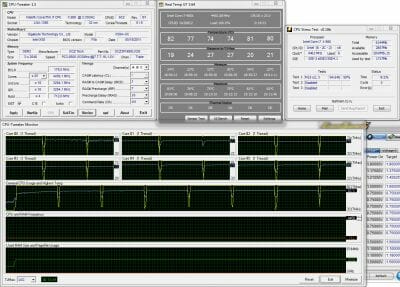 At maximum rotation speed of its fans, Corsair H80 can let our test processor overclock to its maximum: 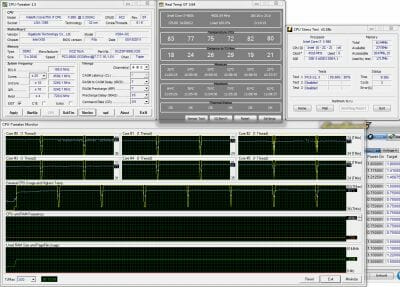 Although in this case the noise from the system is extremely high. We have already discussed it in our previous review, so please check it for more details and the results of the acoustic tests.

So, is Corsair H80 better than H100 or worse? In terms of cooling efficiency and at lower fan rotation speeds it is a little behind, but it offers much broader compatibility with the system cases. Besides, Corsair H80 is 20% cheaper than H100, and a difference like that may be very important for some users. Other than that these two cooling systems are practically the same and boast identical advantages (simple installation, compact size, affordability, super-high cooling efficiency at maximum fan speed, …) and identical shortcomings (high level of noise, aluminum radiator, lack of manual rotation speed adjustment option, …). And since they have so much in common it should be fairly easy to find the best model for your particular system case and processor. As for us, we still hope Corsair will continue to improve their Hyrdo series liquid-cooling systems and will eventually eliminate the issues we pointed out in our articles. We look forward to new products and will continue to keep you posted!