How to Stress Test a Graphics Card

So, you’ve got a new graphics card. Why wouldn’t you overclock it to get the most out of it? Maybe you’re building an ITX system and want to underclock the card to make it quieter and cooler. Whatever the case may be, each of these procedures includes stress testing the GPU for stability because no one wants a BSOD while playing their favorite game. Below you’ll learn how to stress test the GPU as well as the list of the best GPU stress test apps. Let’s begin.

When You Should Stress Test Your GPU?

As we already said, once you get a new graphics card, be it brand new or used, and decide to overclock or undervolt it, stress testing is the best way to check out for stability. Just run a demanding graphics benchmark for a while to see if the GPU can keep going without issues. Next, before you start tweaking your card, you should find out how the card performs in your case in regards to thermals and noise. And the best way to do it is to torture it with a demanding benchmark for an hour or two.

Finding out how the card performs under load is especially important after getting a used graphics card. If it’s older than a year or two, it may require a new coat of paint and by that, we mean a fresh layer of thermal paste. Putting the whole system, GPU included, under a heavy load for a while is a great way to test a new PSU or an old PSU with your new GPU. In this particular case stress test should be performed by playing a graphically demanding game.

How To Stress Test Your GPU

If you’re looking for a stable overclock or undervolt, a preliminary stress test should last for about twenty minutes max. Just select the stress option in the GPU benchmark of your choice. There’s no need to run it longer since thermals will stabilize after fifteen minutes. Five extra minutes are there for bonus points.

If all works well, play a graphically demanding game for a while. The thing is, while essential for stress testing, GPU benchmarks and stress test apps such as FurMark cannot replace a real-world test that puts the whole system under load, not just the graphics card.

The first gaming test should run for about half an hour. That’s long enough to see whether the card’s stable or not. Now, a ton of people online recommends that a GPU stress test should run for 8 hours straight, or even 24 hours. That may be the case if you’re interested in mining cryptocurrencies and are looking for a stable undervolt. but for gaming purposes, the ultimate test shouldn’t be letting the stress test run overnight. Instead, play a demanding game for a couple of hours. If all works well, you’re fine.

Now, when stress testing the GPU you’ll need a GPU benchmark or a stress test app alongside a monitoring app. Fire up the monitoring tool, tweak it so that you don’t have to scroll in order to get the most important data (thermals, boost frequency, and power consumption), and then run the stress test app. It can run windowed since we’re testing for stability here, not trying to get a new high score. Now, if the benchmark has settings, it is recommended to just crank the to the max since this is a stress test.

Okay, on to step 2. Run the stress test and look at the GPU thermals. If there are no crashes in the first fifteen minutes check out the GPU temperature and give it a couple of minutes to see whether it’s stabilized. If the temperature has stopped rising, run the test for a couple of minutes more and that’s pretty much it. Now it’s gaming time. Half an hour should be fine for a start. Here, you’ll need a monitoring app such as the MSI Afterburner to monitor thermals and frequencies.

After you’re done with the preliminary gaming test you can stress the stability test again over the night but if you manage to play multiple games for hours without a crash in the meantime, an overnight stress test session isn’t needed. Okay, not let’s share the best GPU stress test apps.

When it comes to torture tests, FurMark is still the best. This is an extreme GPU torture test and if you decide to use it, use it for short sessions. On the flip side, FurMark is pretty dated and, if you’re looking for stability, it’s better to use a demanding GPU benchmark.

Unigine Superposition is the best free GPU stress test you can use, at least in our opinion. This is a DX12 GPU benchmark that can seriously pound even the best graphics cards on the market. It’s suited for 4K displays and even has an 8K mode. The benchmark itself is a great way to test for performance losses and gains when overclocking or undervolting. The Stress test option only comes in advanced (paid) edition but a couple of runs (3-5) of the benchmark tool should be enough to see if the GPU runs stable or not.

Unigine Heaven is an older benchmark but it’s still quite demanding. Even better, the free Heaven version comes with stress test option so you can put the benchmark on a loop and test the GPU as long as you want. Just crank the settings to the max and click on run. The benchmark will loop automatically so you don’t need to tweak additional settings after you fire it up.

The 3DMark suite is another excellent way to stress test your GPU, but this one’s a paid app. It often goes on sale on Steam so you should be able to get it for less than $5 if you wait for the next discount. Benchmarks included with 3DMark such as Fire Strike, Port Royale, or Time Spy, are some of the most demanding GPU benchmarks today and excellent tools for GPU stress testing.

When it comes to GPU stress tests that can be performed online, no dice. If you want to stress test or benchmark your GPU, you’ll have to download and install an app to your local machine.

For real-world tests, use demanding games. Just crank the settings up until you’ve maxed them, or reached almost unplayable framerate, and then just play the game. Cyberpunk 2077 is one of the best games for stress testing the GPU since it tortures both the GPU and CPU and is also quite hard on the memory, even storage.

Another pretty solid choice for stress testing the whole system is recent Assassins Creed games, with Valhalla obviously being the best choice. This title is extremely sensitive to GPU frequency instabilities and perfect for shorter gaming test sessions. If you don’t have access to these games, any modern title cranked to the max and played for at least half an hour should be enough of a GPU stress test.

Along with a demanding stress test app, you’ll also need a monitoring tool. We recommend getting the GPU-Z for monitoring the graphics card while using benchmarks since the app shows the most detailed info regarding your GPU. If you want to get a monitoring tool that can be used for the GPU, but also for the CPU and the rest of the system, we recommend getting the HWiNFO. It’s extremely detailed, works great, has a ton of customization options, and it gets regular updates.

Last but not least, another must-have program is the MSI Afterburner. It’s used for overclocking and undervolting graphics cards, but also for GPU monitoring, especially in-game. We recommend MSI Afterburner in combination with Riva Tuner Statistics Server as a go-to tool for in-game monitoring.

Now, some people can have issues with setting up the RTSS On-Screen Display so let us guide you through the process. First of all, open MSI Afterburner, go to settings and select On-Screen Display. Once there, assign controls for the OSD and make sure they don’t interfere with in-game controls. 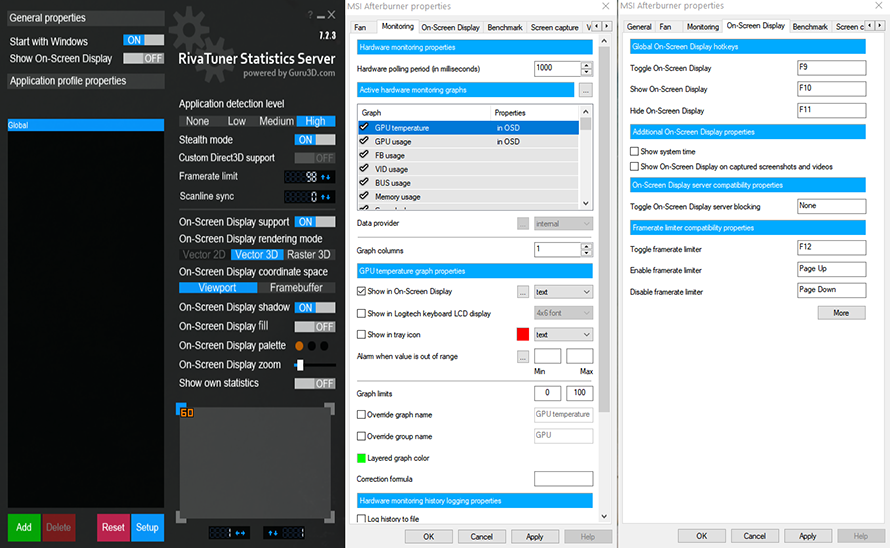 Next, go to Monitoring and select which data your want is shown. Click on the type of data you want to see on OSD (GPU temperature, Memory Usage, etc.), and then click on “Show in On-Screen Display” and pick whether you want to see the data as text, graph, or both. Once you tweak the Monitoring settings, open RTSS and customize OSD looks. While there, turn on the Stealth Mode that should allow the OSD to be shown in multiplayer titles.

Okay, that’s about it. Remember that stress-testing the GPU doesn’t have to be an overnight or 24-hour affair. Half an hour of torture tests followed by a couple of hours of playing a demanding AAA game should be more than enough.

How to Check CPU Usage?

The CPU, or Central Processing Unit, is one of the main components of any PC without which it can’t function at all. CPU usage is what we refer to when we’re trying to determine how hard the CPU is working and how much stress it is currently handling due to various tasks running on the […]

How to Unban Someone on Discord

The online gaming community has been known to include players who are toxic, who spam a lot and enjoy trolling others until they get so annoyed and leave. Discord is a place where you can see all kinds of users, and it’s not too rare to see a few toxic players as well. When you’ve […]

Most people who are new to Discord or who haven’t used the platform at all believe that it’s just a simple tool where you hook up your mic and talk to your friends. Little do they know that Discord offers plenty more features that many have a hard time figuring out without a little bit […]

Steam offers anyone the ability to share every single game they possess in their library with other family members. This doesn’t have to limit you to share with only family members, as you can do the same with some of your closest friends and other people that you trust and care for. The way Steam […]

How to Whisper on Twitch?

One of the best things about Twitch is the huge collection of features and benefits for their users, such as Twitch Drops, Voting, Game Extensions, and more. Whispering on Twitch is also one of those features. You may be asking yourself, “what is whispering on Twitch?” The best way to understand this is to remember […]

What Are Stream Snipers and How to Deal With Them

One of the most popular platforms for live streaming is Twitch. There are countless benefits that it can provide for both content creators and viewers as well. However, there are often annoying issues that come with being a streamer, as something called Stream Sniping is a horrible situation to find yourself becoming a victim of. […]