If you are looking for a webcam and you come upon these two, you may wonder what’s the difference between the Logitech C920 vs. C922.

Either one of these webcams will give you excellent video quality, and they are both useful when it comes to content creating or streaming needs.

So take a look below for the specifications of the C922 vs. C920. And pick which one is better for your needs.

Comparison of the Specifications of the Logitech C920 vs. C922

When you compare the Logitech C922 vs. C920, the similarity is undeniable.

They have the same hardware and sensor, so because of that, the color shift difference on your screen between those two is almost undetectable.

The C922 also comes with the 3rd party software support for background removal, and that is pretty much it, which makes the C922 just a slightly upgraded version of the C920. 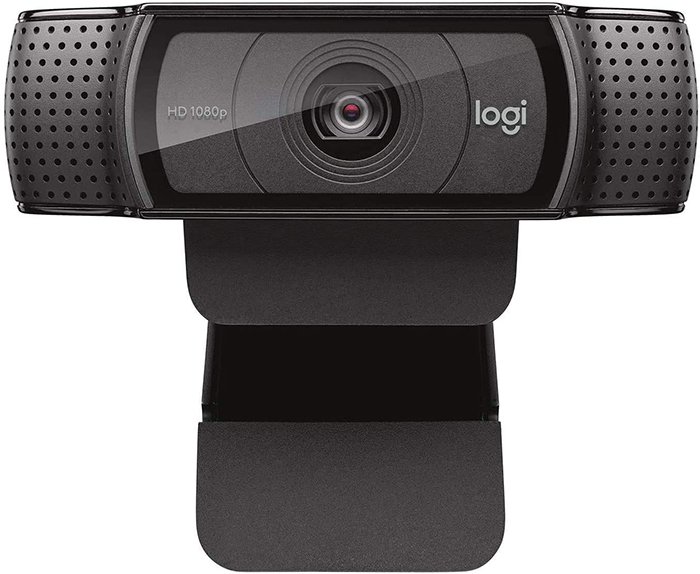 Design-wise the C920 comes in black color, and it is a 3.7-inch webcam with LED and microphones on both sides. It also comes with a 6-foot length USB cord that you can connect to your device.

And when it comes to picture quality, the C920 has a 5-megapixel (5168 x 2907) camera, and it features an automatic low-light correction, and a top-notch video quality coming in at 1080p.

The C920 offers great microphones that provide a loud and clear audio sound during your video calls and streaming sessions.

We’ve looked around the web and the lowest price we’ve found the Logitech C920 was at 50 dollars.

The C920 uses Logitech’s Webcam Software for Windows. This program allows you to zoom in or out with the camera or move left or right, which may be useful in many situations.

The most fun part of the software is that it features many background changes and avatars you can use on your streams. Sadly, the program tends to crash, and it works slowly.

The tripod provides you with a 360-degree swivel mount, and the legs of the tripod extend up to 7.3 inches.

The picture quality in the C922 comes with an improved low-light correction, which makes it even better. And the audio sound is amazing. It’s clear, even if you are several feet away.

Also, Logitech is selling the C922 in two versions for the same price. So you can either get it with the tripod or get it with a six-month XSlit license.

The Logitech C922 can be found for a price of 70 dollars.

The C922 doesn’t work the same as the C920. This one comes with specific apps made for streaming. This software is called ChromaCam. This program creates a green-screen behind the streamer, and you can use some of the many backgrounds, or you can even upload your own picture as your backdrop.

So if you are a streamer and already use XSplit Gamecaster or OBS to stream, you will just need to change some settings and, you are ready to use ChromaCam.

Which one is better?

Looking at the features and the potential of both webcams, we would give it to the Logitech C922.

With the Logitech C920, you need the green screen feature and the software separately, as with the C922 is not a removal feature. Instead, it comes with the camera.

Both of these webcams are nice and will provide you with an amazing experience for their price.

If you are on a stricter budget, you should go for the C920, and if you can allow yourself to spend a little bit more, you can get the C922.

Typically, people get away from Logitech products because of the software and drivers’ problems in most of their devices. But keep in mind that they made some changes and fixed many problems they had with their software.

Also, keep in mind that lighting plays a huge role in your webcam video quality, and both of these cameras combined with good lighting will give you a DSLR quality on your videos.

Thanks for taking the time to go through our article. If you have any other suggestions, why one is better than the other when we are comparing the Logitech C920 vs C922 please share them in the comment section below. Make sure to also share this article with your friends who are thinking of buying a webcam either for streaming or just regular webcam calls.

For the longest time having a good gaming keyboard meant that you need to have a full-size (100% keyboard) slab of plastic in front of you that could alternatively be used for self-defense, paddling a canoe, or perhaps surfing on it. Those days are long gone and the new trend in gaming keyboards and enthusiast-grade […]

What if I told you that the age of overly expensive gaming gear is over, and budget options for keyboards, mice, and mousepads have become so high quality that the only thing that is budget-friendly about them is the price? If you don’t believe me just yet, I will change your mind with the review […]

If you like high-quality gaming peripherals (keyboards, mice, headsets) and especially very good mousepads you have definitely heard about Artisan, the Japanese wonder company that is currently producing what are undoubtedly the best mousepads on the market. Although these Artisan pads are premium quality there is a minor issue that all people interested in purchasing […]

The gaming peripheral market has been truly shaken up lately with extremely good gaming mice, headsets, and budget mechanical keyboards. While those changes were indeed splendid, the biggest, most notable change happened in the gaming mousepad industry with the rise in popularity of Artisan mousepads. Artisan is a Japanese company that produces the highest quality […]

The Glorious Model O family of gaming mice is one of, if not the most popular line of products for new members of the PC master race and veterans alike. The original Model O was a revolutionary mouse since it made the ultralight design (Model O 67G, MOW 69G) initially introduced by Finalmouse available to […]

Mouse Grip Tape – Do You Need It and What Are Your Choices?

Even though the gaming mice industry is no longer dominated by stock feet and stiff rubber cables, enthusiasts still like to mod their mice with aftermarket PTFE feet, Paracord cables, and recently with grip tape. What Is Grip Tape? As the name would imply, mouse grip tape is a rubberized material with an adhesive side […]