We are going to discuss the successor to Thecus N4200PRO – the N4800 based on Intel Atom 2.13GHz (Dual-Core). This NAS is positioned for small and medium businesses that need centralized storage, application serving, and high response time within multi-user environments.

The N2800 network attached storage device from Thecus we tested recently has an elder cousin. The N4800 model is designed for four disks and has a couple of added features. First, it is equipped with a built-in battery that protects data against power failures. Second, it has a full-size PCIe and a miniPCIe slot which can be used to add more network interfaces to it.

The rest of the specifications are almost the same: an Intel Atom D2700 processor with support for four execution threads, 2 gigabytes of system memory, a DOM with firmware, USB 3.0 and eSATA ports, and an HDMI output. The four-disk model also features a dot-matrix display with controls on the front panel. You can use them to monitor and adjust some of the device’s parameters.

There are but few changes from the junior model in terms of packaging and accessories. The box is larger at 31x26x30 cm and has a carry handle although the N4800 is considerably heavier. You can see photos, specifications and usage scenarios of the product right on its packaging. 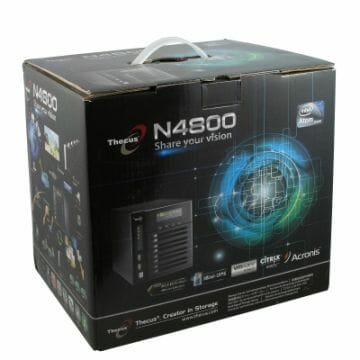 Although the N4800 has a large case, its power adapter is external. We don’t think that the PSU’s full 120 watts can really be utilized whatever disk configuration you may use. 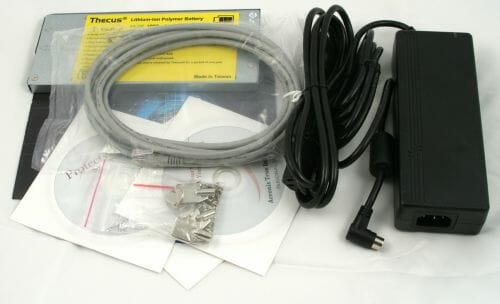 The box also contains an Ethernet cable, a mains cord, HDD fasteners, keys for the disk bays, documentation, a battery, and a software bundle (including Acronis True Image Professional 2010). The full version of the user manual available in electronic format is over 160 pages long.

The N4800 resembles its predecessor N4200. The manufacturer hasn’t invested into its design, but the NAS looks good enough anyway. The case is about 17x25x20 cm. The front panel is made of plastic. The rest of the case is metallic. The color is conservative but the multicolored indicators in the left part of the front panel enliven the black case. 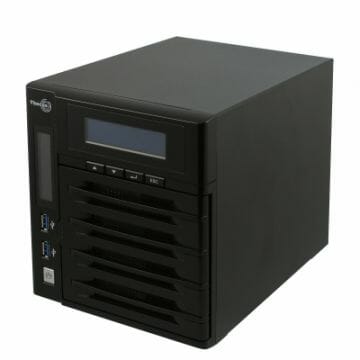 The dot-matrix display is accompanied with as many as four buttons, so it is quite handy to use. The access is password-protected, by the way. 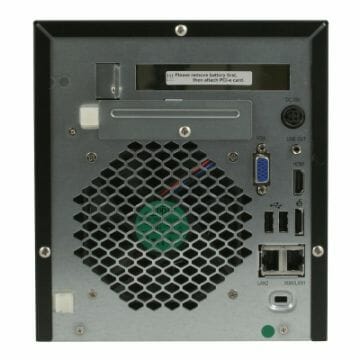 There is a Power switch in the bottom left. Shutting the NAS down requires an additional confirmation via the display, which is good. It is arguable whether high-speed USB 3.0 ports should be on the front or back panel, but the Thecus N4800 has two such connectors on its front. The disk bay is covered with a metallic mesh door. It is the only vent hole for the HDDs.

On the back we can see expansion card and battery slots, a 92mm fan grid, a power connector, VGA and HDMI video outputs, one analog audio output, two USB 2.0 ports, one eSATA connector, and two Gigabit Ethernet connectors. The power connector is placed rather too high, but the 4-pin power cord holds tight in it.

The Thecus N4800 is based on Intel’s Atom D2700 processor which has two cores clocked at 2.13 GHz and supports four execution threads. The OS is 64-bit. Disk controllers are integrated into the ICH10 chipset which is also responsible for the USB 2.0 interface whereas the two front-panel USB 3.0 ports are based on a NEC controller. The Thecus N2800 has two SO-DIMM slots for system memory, one of which is occupied by a 2GB DDR3 module. So, you can easily upgrade its memory subsystem if you want to. 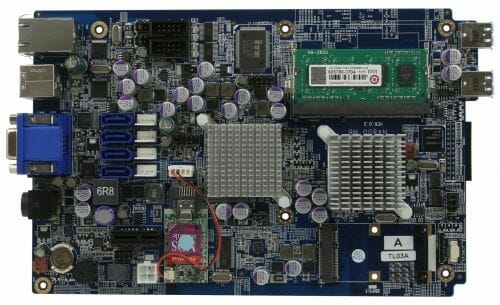 The DOM with firmware has a capacity of 1 GB and is connected via SATA. The Ethernet controllers are based on Intel 82574L chips. A Realtek ALC262 chip is responsible for audio. The full-height PCIe slot is x1 but you can install broader cards into it. A miniPCIe is available, too, although it is rather unusual for a NAS.

The interior doesn’t look neat because there are too many cables inside. The HDDs are connected via individual connectors instead of a backplane. The ADDA fan uses 3-pin connection. Its speed is regulated automatically. You can also spot a second fan connector on the PCB.

The video outputs and USB let you use this NAS as a desktop PC. For example, you can enter its BIOS, change settings or install a different OS.

Considering that the N4800 isn’t different from its cousin we discussed in our previous review in terms of firmware and functionality, we won’t repeat it again. You can refer to the mentioned review in which we used the same firmware version (2.03.06.atom). We’ll only cover the differences here.

The display and buttons let you start the N4800 up without a PC. For example, you can change the default fixed IP address with another one or enable DHCP. 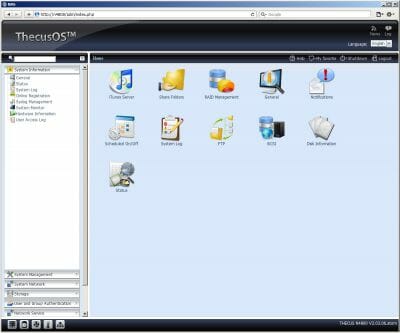 The four disk bays allow building the following disk configurations: JBOD, RAID0/1/5/6/10. A replacement disk can be specified for a fault-tolerant array.

As opposed to its junior cousin, the N4800 allows increasing the size of its disk volumes without losing data by sequentially replacing disks in a RAID1/5/6 array. It also offers several migration variants (from RAID1 to RAID5 or RAID6; adding an HDD to RAID5; RAID5 to RAID6) without data loss. The built-in battery protects your data, but cannot replace a full-featured UPS. In case of a power failure, the NAS enables a sound alarm, writes an appropriate entry in the log file, and shuts down when the battery is depleted. The battery status cannot be monitored via network. The NAS’s display may report Full even if it is going to shut down in less than a minute. Unfortunately, the NAS cannot turn on automatically when power is restored. 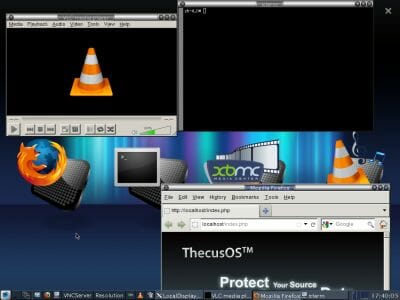 Thecus’s N2800 and N4800 models were the first to support media player capabilities. The add-on modules LocalDisplay, XBMC and VLC enable the integrated Linux graphics environment and use the CPU’s graphics core to decode and output video, also in Full HD formats. Digital TV programs can be recorded after inserting a compatible TV tuner into the NAS’s USB port. Still, we can’t say that this solution is competitive against true media players, mostly because its control options are limited. The simplest controller for XBMC is a wireless keyboard but we hope that network-based control via modern smartphones will be implemented in the future.

The first diagram shows you the performance of the NAS with different RAID configurations.

We can see that there’s almost no difference in performance between the different types of RAID, which means that the hardware platform can cope with higher loads. The peak read speed is about 90 MB/s whereas writing is affected by the client OS’s caching. The results are quite normal for a modern high-speed SOHO/SMB device.

When testing the N2800 model, we had odd results with external disks. That was probably a problem of the specific sample of the NAS. The N4800 allows us to check this out. First goes USB 2.0. 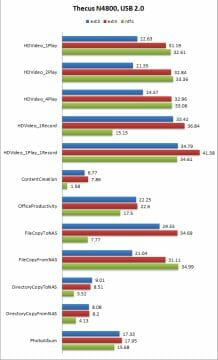 External disks with USB 2.0 interface can get as fast as 35 MB/s. EXT4 is expectedly the best file system in terms of performance. EXT3 is slower at reading and NTFS, at writing. 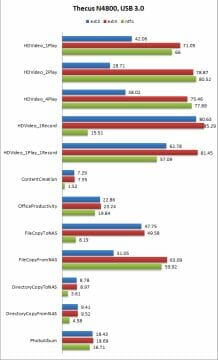 USB 3.0 is faster: up to 80 MB/s with EXT4, which is comparable to the read speed of the internal HDD. The other file systems are much slower than with the previous USB version. 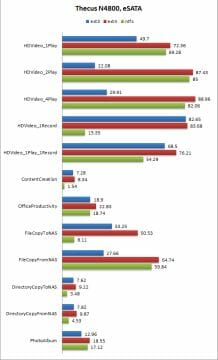 Thus, the N4800 is quite fast with external disks. Its USB 3.0 interface is most appropriate as it supports on-the-fly connection and disconnection of disks and allows running more devices concurrently than eSATA.

The Thecus N4800 features an advanced hardware platform and a lot of I/O interfaces. The opportunity to install expansion cards may come in handy for certain usage scenarios. The four HDD bays make it more flexible than the N2800 model.

Thecus has implemented some special features of its older products here: a functional dot-matrix display and a built-in battery.

The new platform supports video output and media player capabilities. However, this feature is currently targeted at enthusiasts and cannot compete with entry-level media players in usability.

Having the same firmware as its junior cousin, the N4800 can be successfully used on home and office networks, including heterogeneous environments. The extra software services include a media server, a file download system, backup tools and cloud storage services. However, notwithstanding notable enhancements in functionality in the latest firmware versions, Thecus still cannot match the leaders of the NAS market in this respect.