Thumb Drive Vs Flash Drive Vs Jump Drive – Aren’t They the Same?

Terminology can be very confusing when it comes to computers. A GPU is not the same as a graphics card, but they are often used interchangeably, and the same can be said for many other terms.

When it comes to storage, particularly fast and portable storage, one can without a doubt bump into USB flash drives. They are also known by many other names such as a jump drive, thumb drive, flash drive, pen drive, etc. Do these terms describe the same device, however, or at least a similarly functioning one? Let us take a closer look.

Thumb Drive Vs Flash Drive – A Matter of Semantics

When you boil it down, thumb drive and flash drive refer to the same type of device. A small storage device that uses the USB (Universal serial bus) interface to connect to a computer is a flash drive. The term flash stems from flash memory which is a type of non-volatile storage memory used in flash drives and SSDs. Flash drives nowadays are much faster and use faster storage such as 3D nand, which also enables more storage per area (up to 2TB in a rather small and portable drive).

Its other names come from various related topics such as thumb drive being related to the device’s size. 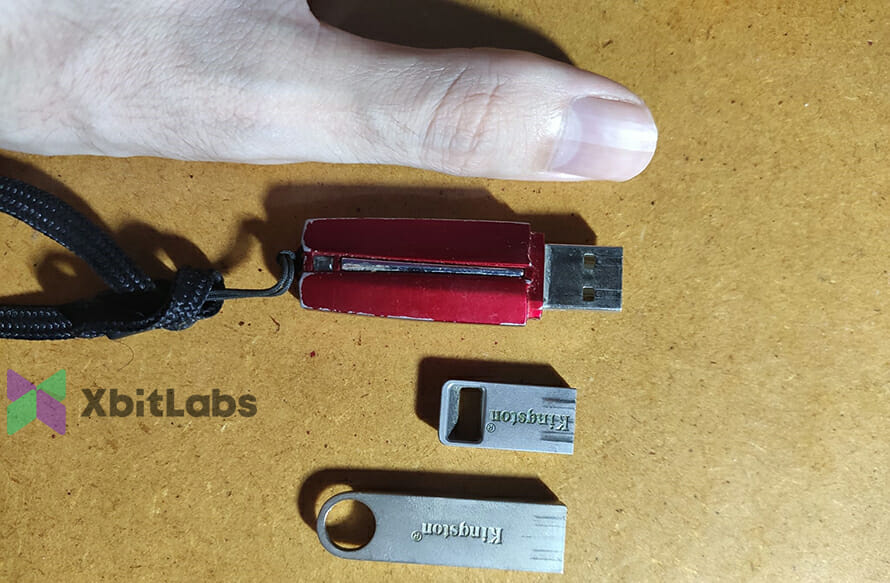 As we can see in the image above, the earlier USB flash drives were about the size of an average human thumb. Fast forward a decade and you have much smaller devices with exponentially more storage.

The red flash drive has 256 MB of storage while the two Kingston drives have 32 GB and 64 GB. Note that the larger Kingston drive has more storage, but that has more to do with practicality. There are even smaller drives with a larger capacity but they tend to be impractical (they can easily be lost or misplaced). Size is not always the most important thing, nor is storage capacity. There are many factors which can be used to determine what the best flash drive could be (for your use case).

Jump drives are the same as flash drives or thumb drives, but the name “jump” might have been attached when they were extensively used to bring new operating systems up to speed (with essential drivers and software).

Bootable flash drives are also often called jump drives, because they can literally be used to jump (start) operating systems that do not boot, or at least to identify the issue/s.

Pen drives, on the other hand, also refer to USB flash drives, but the term pen comes from flash drives which double as functioning pens. There was a period when putting a flash drive into everyday objects was done by almost all companies, trying to capitalize on a booming portable storage business. Most people used such “pen drives” as advertising tools, giving them away as a sort of a business card, but a digital one.

Conclusion and Summary – Why So Many Names?

When something as everyday (at least in recent history) such as a USB flash drive, gets so many different names, things might get confusing. A flash drive or a thumb drive or a jump drive, by whichever name you know it, might refer to the same thing.

Note that a USB flash drive is not the same as flash memory, which can be used for many different devices, such as M.2 drives and SATA SSDs. The USB part denotes that this particular form of flash drive (memory) connects via a USB interface.

All in all, whichever term is used in your part of the world, whether pen, jump, thumb or flash, if drive is the second word, then it is likely referring to a USB flash drive. This is a type of portable storage device which uses flash memory and the USB interface to connect to computers and transfer stored data.

USB Flash Drive Lifespan and How to Improve It

We all have a flash drive lying around, and even some that are more than a decade old. Some of these flash drives are working, while a newly purchased one might end up with data corruption. While there are plenty of stories that contribute to the myths that flash drives are unreliable and unpredictable, looking […]

Is There a Way to Read a Floppy Disk Today?

Today, deprecated technology such as cassettes, videotapes, laserdiscs, and even CDs, are rarely in use, if at all. Enthusiasts might have a drive handy, however, even they are found at a loss when faced with technology that is not even supported by modern computers. Floppy disks have been out of use since the mid 2000s, […]

How to Recover Unallocated Space on USB Drive?

USB drives are susceptible to various read/write errors, mostly because they are removable drives and are often exchanged between many computers. These computers may have different operating systems which might not always do things the same, which can lead to write errors, or in some cases, read errors on another PC. The effect of such […]

How to Choose a Filesystem for Your USB Drive

WinRAR vs 7-Zip. Which One to Choose?

When it comes to dealing with a lot of files that need to be moved or transferred it is common practice to use compression software that will put all of your files in one place and also shrink them down a bit so you can send them away easier. The reason this practice is so […]

FAT32 vs exFAT vs NTFS: What’s the Difference?

Organizing our files is one thing, but preserving them another, completely. There have probably been instances of plugging in a flash drive into a Windows system, to realize that the Windows system sees it as corrupt. Track back to your Linux system and everything is working properly. Is the Windows system at fault? Partly, but […]