USB Flash Drive Lifespan and How to Improve It

We all have a flash drive lying around, and even some that are more than a decade old. Some of these flash drives are working, while a newly purchased one might end up with data corruption. While there are plenty of stories that contribute to the myths that flash drives are unreliable and unpredictable, looking at facts should demystify everything.

Flash drives can have a really long life expectancy, which is based on their physical use or abuse, as well as the quality of the electronics. Understanding how flash drives work is a great starting point to learning how to improve their life expectancy and essentially, save our data.

Given their name, flash drives, and even though they go by pen drives, jump drives and thumb drives, in the root of flash drives lies flash memory. More specifically, NAND flash is used to make the storage side of the drives.

NAND flash is also used in SSDs, either SATA or NVMe, as well as for phone storage. Depending on the NAND cells, which can be SLC, MLC, TLC or QLC, the write cycle per cell decreases the more layers there are. This translates to, drives with more storage have fewer write cycles.

This flash memory has to be controlled via something, so enter the memory controller, which alongside the type of NAND flash, determines read and write speeds. A physical connector, typically USB type A, is used to interface with devices.

All flash drives register as USB mass storage devices which increases compatibility with almost all devices. This is due to its memory controller.

Flash drives also have a crystal oscillator which is used to make sure that the frequencies in the drive are constant and that the digital circuit operates as it was intended to.

Depending on the type of drive, its size and the way a user works with a drive, its life expectancy can be varying, to say the least.

What is the Shelf Life of a USB Flash Drive?

USB shelf life is more or less infinite, however, NAND flash stores data by holding a charge in its cells. You would have to periodically plug in the drives and refresh the charge. Shelf life for stored data is about 10 years, with proper storage, of course.

When no data is stored and if the drive has not reached its write capacity, it can last for a long time. 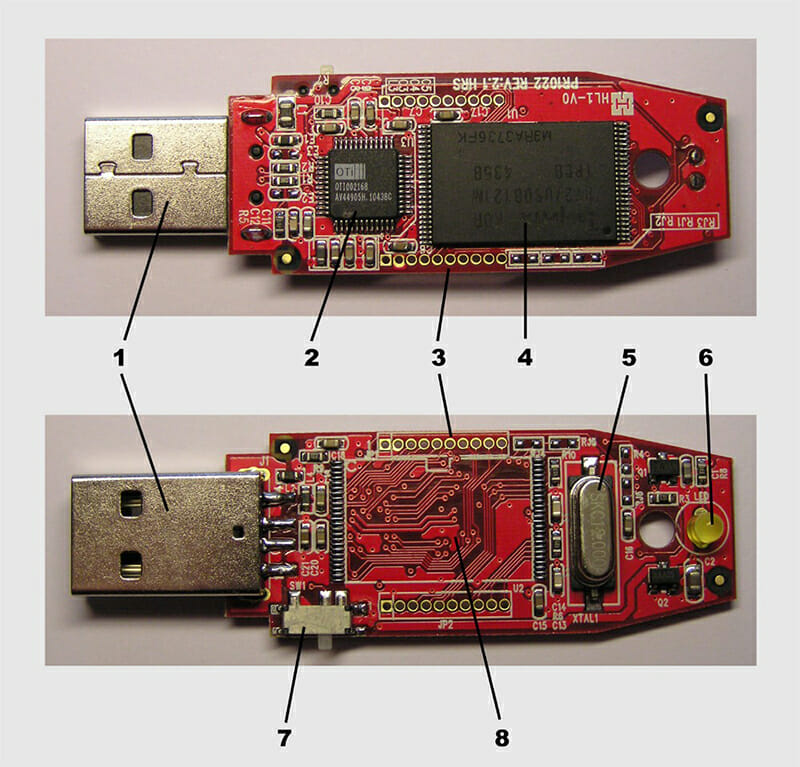 A USB flash drive and its parts:

As with all electronic devices, there are a plethora of factors that could affect their life expectancy. Let us start with the most common ones.

Physical damage is often not the main concern of most consumers. However, most drives are rated at about 15,000 insert/remove cycles, before the physical connector gets damaged. Inserting and removing a drive is not the only way you could damage it.

Physical damage to the drive, such as dropping it, could cause damage to the internal components, not just the physical interface. Even the best USB flash drives can be ruined with enough physical abuse.

Like all NAND flash, USB drives have a limited number of writes, or rather, how many terabytes of data you could write to the memory before it is permanently damaged. After you exceed the limit, you can only read data from the drive.

Excessive writing such as editing files directly on the drive, will make its lifespan shorter. Typically, normal users will not exceed the write cycles of their drives. Drives also have a way of moving data around once a single cell becomes unusable.

All electronics are affected by temperature. Flash drives could be hurt by extreme temperatures, over 70 degrees Celsius or -10 when stored. When in operation, the margins become tighter, usually a range of 45 degrees to 0. When in use or in storage, cool and dry conditions are recommended, as is the case with all electronic devices.

What to Do to Improve Flash Drive Life Expectancy

Since flash drives behave similarly to SSDs, the same principles should apply, with a bit of extra care due to their small size and, often, fragility.

Do Not Drop or Otherwise Physically Damage the Drive

Most USB flash drives are really small and their insides are a PCB with a Type A connector. Any and all physical force may cause some of the components to be damaged. A damaged connector is the most common way to physically break a flash drive.

However, if one applies enough force, it is possible to harm the electronics. Due to their small size, they can be misplaced and even stepped on. It is also recommended not to carry them in your pocket, but rather, use them purposely.

Some filesystems are meant to preserve data, such as ZFS, though you would sacrifice compatibility. BTRFS is a good choice for compatibility and data preservation, though FAT32 and NTFS are also common, but not as good when it comes to storage.

For most users, exceeding the write cycle of the entire drive is a difficult thing to accomplish, unless they move gigabytes of data on a daily basis. Unless there is a strong necessity, frequent data writes should be avoided. This will increase the longevity of the NAND cells.

Connect the Device Regularly to Refresh the Charge

If you plan on using the drive to store data, connect it from time to time to refresh the charge of the cells, because that is what keeps the data intact. Once every three months is more than enough, particularly if no additional data is written.

Even though most people consider this a meme, safely removing hardware actually unmounts the partitions. This should be done every time removable media is used, to make sure no data corruption ensues.

Data can be recovered after a loss, but unmounting hardware can prevent unnecessary headaches.

UPSs can save a computer, data, as well as flash drive from corruption. A lot of things can go bad with electronics in case of a sudden power outage, particularly if sensitive work is being done at the moment.

If the drives are properly taken care of and excessive data writing is avoided, flash drives can last for a long time, especially if they are not storing data. Physical damage, lots of writing, extreme temperatures and electric hazards could harm flash drives and even destroy them.

Periodic data checking is encouraged in case of storing data on a flash drive, as well as writing data only when necessary. Physical damage should be minimized or rather, avoided completely.

Shelf life of a USB drive is pretty good, as can be seen by the image below. 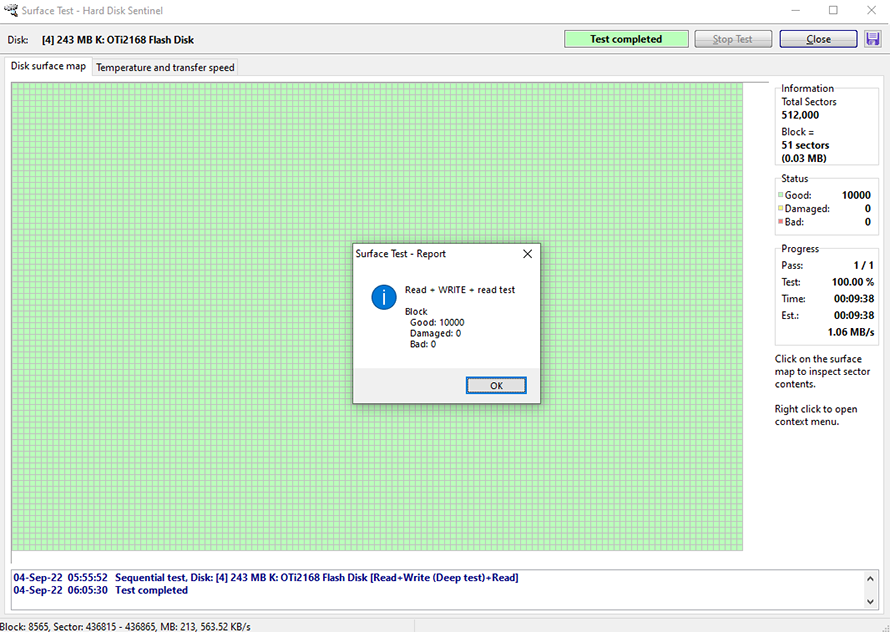 This was a successful/perfect read + write + read test of the author’s 17-year-old flash drive, still usable, if only to store smaller files.

Is There a Way to Read a Floppy Disk Today?

Today, deprecated technology such as cassettes, videotapes, laserdiscs, and even CDs, are rarely in use, if at all. Enthusiasts might have a drive handy, however, even they are found at a loss when faced with technology that is not even supported by modern computers. Floppy disks have been out of use since the mid 2000s, […]

How to Recover Unallocated Space on USB Drive?

USB drives are susceptible to various read/write errors, mostly because they are removable drives and are often exchanged between many computers. These computers may have different operating systems which might not always do things the same, which can lead to write errors, or in some cases, read errors on another PC. The effect of such […]

How to Choose a Filesystem for Your USB Drive

WinRAR vs 7-Zip. Which One to Choose?

When it comes to dealing with a lot of files that need to be moved or transferred it is common practice to use compression software that will put all of your files in one place and also shrink them down a bit so you can send them away easier. The reason this practice is so […]

FAT32 vs exFAT vs NTFS: What’s the Difference?

Organizing our files is one thing, but preserving them another, completely. There have probably been instances of plugging in a flash drive into a Windows system, to realize that the Windows system sees it as corrupt. Track back to your Linux system and everything is working properly. Is the Windows system at fault? Partly, but […]

How to Tell if Your Hard Drive is Failing?

Hardware failure can be one of the worst things to happen to an enthusiast, not to mention a professional. Even regular consumers can lose lots of data in the case of a hardware failure. Data is stored on hard drives or more recently, solid-state drives, also known as HDDs and SSDs. Hard drives are the […]