Gaming Monitors vs TVs for Gaming

A good monitor will make or break your gaming experience, especially if you enjoy playing competitive games where you are pitted against other people in a contest of skill. Although TVs have generally been used for casual console gaming their technical capabilities and specs are often subpar even compared to the budget offerings on the monitor market making them obsolete.

Considering we are purely interested in the gaming aspect of the performance between monitors and TVs it is pretty clear that the gaming monitors win. If you want a simple yes or no answer then there you have it, but if you are interested in why exactly our recommendation leans towards monitors then follow along.

As mentioned before the main issue with using TVs for gaming is their subpar technical capabilities. The main specs a gamer would look at like refresh rate, input lag, resolution, display size, and panel type which mostly fall short of accommodating a good gaming experience.

Each of the specs mentioned above have different implications so to put this question to rest we will go through each one pointing out the reason why TVs do not make sense for gaming.

One of the main specs that every gamer talks about nowadays is the refresh rate. In simple terms, this refers to how many times per second your monitor/TV updates the image on the display to achieve fluid motion and fast response times.

Monitors have gone a long way to achieving up to 390 Hz with the industry standard being 240 Hz for most gamers. Such a high refresh rate results in extremely smooth motion allowing for the players to track enemies without much trouble. By comparison, the highest refresh rate you can achieve on the newest TVs is 120 Hz which is quite underwhelming since this is considered a 2000’s era capability in terms of monitor technology.

Another huge issue with using TVs for gaming that drives people crazy is the input lag that comes from using a device that is meant for media entertainment and not specifically gaming. Gaming monitors and monitors, in general, have been using fast panels to achieve as little delay as possible between pixel response times allowing for crisp inputs.

Considering that the top 5 monitors in terms of input lag are all under 2 ms you can understand why gamers would care about this issue when playing on a device where you can visibly see the input delay (magnitude of full seconds).

There are of course “gaming” modes on some TVs that try to reduce latency by using overdrive modes for the panels but those are nowhere near to getting close to what a monitor can do natively in terms of input lag.

Resolution is a spec where TVs are beating out most gaming monitors with 4K and 8K options available on the market. 4K monitors are also mainstream but there is a reason why most gamers play at 1080P or 1440P max.

The higher the resolution of your display the harder your GPU needs to work to push out all of those pixels making higher resolutions hard to justify when you are playing your game at 60 FPS or under.

Even as a casual gamer you would want to play your games above 60 FPS both on PC and on consoles therefore 4K and 8K resolutions simply do not make sense(RTX 3090 choking at producing 60 FPS @ 8K – more benchmarks). For media consumption TVs with their 30+ million pixels and 8K resolutions make sense, but in terms of gaming having a super-fast 240 Hz+ monitor makes a lot more sense. More is not better in this case and monitors make more sense once again.

This is another spec where TVs would win in terms of sheer size but as with resolution, more or rather bigger is not better for gaming. Most competitive gamers would sit at about an arm’s length away from their monitor or closer so they can focus on what is happening on their screen.

This allows them to see the entirety of their 24’’ or 27’’ monitor so they can react in time to in-game changes. Considering that TV sizes start at 32’’ and go up to 85’’ you could see how gaming on such a huge panel would be a problem.

You could argue that casual couch gamers would enjoy such a huge display more but in terms of immersion during gaming having your TV 2-3 meters away does not help your cause. The size also does not negate the issues of 60 Hz, huge input lag, and a lot of processing power needed for smooth gameplay. Definitely a great size for media but not for gaming.

Most modern gaming monitors tend to use TN or IPS displays which have fast response times and can maintain high refresh rates which make them great for gaming.

IPS panels are even better with great color reproduction which makes them well suited for both gaming and media consumption. Sometimes you can also find VA panels used in gaming monitors which are okay for gaming but suffer from a lot of ghosting since the VA technology is inherently slow.

The newest TVs on the other hand tend to use OLED-based panels which surprisingly are faster than LED-based displays. What this means is that you could technically see a situation where a TV using an OLED panel would beat a monitor in terms of pixel response time.

Most testing shows that technically LED/LCD panels are close to what OLED panels achieve in response times but OLED panels can output a cleaner image and have less ghosting and smearing. Overall this would mean that under very specific circumstances (and if you do not mind the costs) a TV could be potentially used for gaming but when looking at the overall capabilities of modern gaming monitors it seems that this is rather an exception than a common occurrence.

Another big reason why you should probably buy a gaming monitor over a TV is that most monitors nowadays come with G-Sync and FreeSync technologies which will allow you to enjoy tear-free gaming. This might not sound like a big deal for you but in reality, there is a huge difference between a monitor that is G-Sync/FreeSync capable in terms of the overall smoothness of images displayed on the screen. 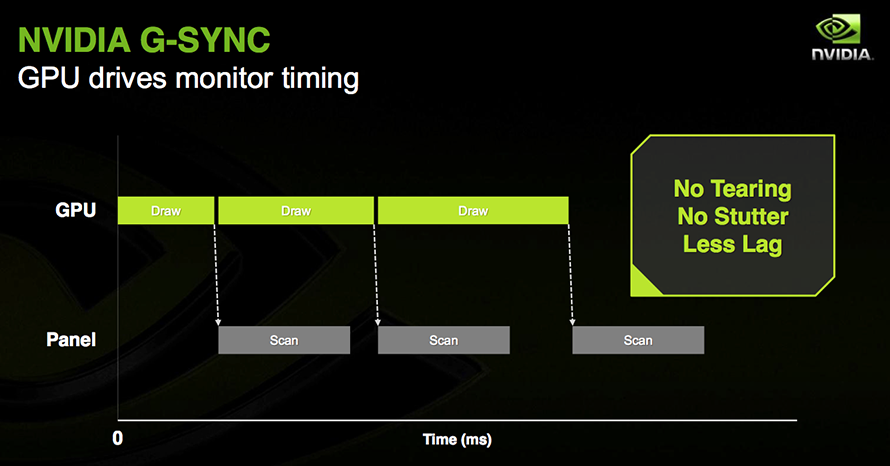 The last reason that we think will convince most people to turn away from TVs is the fact that overall it is a lot cheaper to buy a 144 Hz+ gaming monitor now than it is to buy a TV that could rival said budget monitor. Buying a gaming monitor is cheaper, and also superior spec-wise making it a hard stretch to try and promote TVs for gaming.

TVs are made for entertainment and therefore are geared towards better image quality and higher resolutions, while gaming monitors are snappy and have high refresh rates for a better gaming experience. If you are interested purely in gaming there is absolutely no reason why you would buy a TV over a monitor, and that is a fact.