Wifi has been around for more than 20 years and in that time, it developed to accommodate more devices, broader frequencies and new ways of operation. But even with that, a saturation of devices in the “legacy” 2.4 GHz range, can lead to interference and cause connection issues.

Devices like mice, keyboards, headsets, mobile phones and their Bluetooth connection, microwaves, controllers (Xbox and PS), wireless music equipment, and many more, can cause interference in the 2.4 GHz frequency band.

Changing your wifi channel is a relatively easy task, but selecting the best channel for wifi takes a bit more. With the right tools and know-how, it can also be done, following the next steps.

Tools of the Trade

Frustrated as one might get when their wifi keeps disconnecting (this may be an issue with a range rather than saturation, which is when a better long-range router might be a better solution), they might type “find best wifi channel”, only to be met with even more questions.

The simple solution is to use tools that analyze the frequency spectrum for saturation. For Windows 10, there is a tool on the Microsoft Store called the WiFi Analyzer. An eponymous application is available for Android devices, along with a plethora of others. iOS and Mac users also have the option of using an application called Network Analyzer, which does the same thing.

All of these applications will either graphically or otherwise, display which channel of your available wifi channels is the best wifi channel at the moment. This may be presented with a color-coded graph or a simple rating system, whether numerical or otherwise.

Note that this may vary from device to device and location to location, which also depends on whether you are using 2.4 GHz or 5 GHz on your router, or both.

Another thing to note is that accessing your router settings is required to change the wifi channel and their corresponding settings. It is also a good place to start if you want to start securing your wifi network. 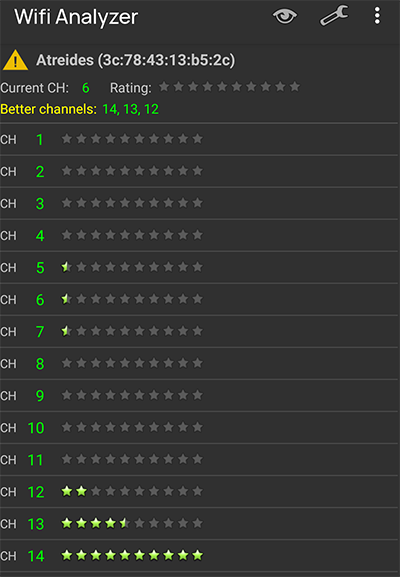 2.4 GHz has been around since the first wifi, 802.11, nowadays called Wifi 1, meaning 1997. During the 24 years that passed, many devices which use the same frequency were invented, most of which use either wifi or bluetooth in the consumer space. This leads to a large saturation of the frequency, but usually due to the automatic selection of wifi channels on the routers.

The 2.4 GHz band has 11 channels, or rather, is divided into 11 channels, each 20 MHz wide. 11 channels might sound like enough, but realistically, only 3 of them do not overlap with one another. The three are often considered golden, numbers 1, 6 and 11.

Channels 2-5 and 7-10 overlap. This is problematic when they are selected because it will eventually lead to Adjacent Channel Interference or ACI. This happens because any station transmits signals without regard to what is happening on the other (overlapping) channels. It is therefore generally advised to select channel 1, 6 or 11, as an almost guaranteed way of increasing your wifi speed.

It should be noted that Wifi 4 or 802.11n also introduced 40 MHz wide channels for the 2.4 GHz band, but it is often recommended not to use the option.

Compared to 2.4 GHz, the 5 GHz frequency band has many more channels, from 36 to 165. This means many 20 MHz channels that do not overlap with one another. Wifi 5 or 802.11ac introduced the ability to have 80 MHz and 160 MHz wide channels. Bonding channels together, this provides a wider channel.

These wide channels increase throughput which also increases the potential top speed you can use. Yet choosing the widest channels also introduces more interference, due to Co-Channel Interference or CCI. CCI happens when multiple access points in close proximity operate on a single channel.

When one ‘widens’ a channel, they introduce more noise so if there are two 5 GHz routers close together and both have 80 MHz or 160 MHz channels, they will suffocate one another.

Selecting narrower channels is recommended if you have multiple access points around, suffocating your signal. If you have only a 5 GHz router in your immediate area (apartment, office), you can select the 80 MHz and 160 MHz channels and be perfectly fine.

Note that the 5 GHz band is wide enough so that channel selection should be okay without additional user input (other than the channel width).

What About the 6 GHz Frequency Band?

Wifi 6e is new, with routers being deployed in 2021. With that, the 6 GHz frequency band will have channels available from number 1 to number 233. This means a wider selection of channels that will not overlap with one another, at anywhere from 20 to 160 MHz.

As of now, there are not that many devices using 6 GHz, nor that many devices using Wifi 6, for that matter. The same principles should apply to this frequency band as they do to 2.4 GHz and 5 GHz. The narrower the channels, the more you have to work with, but the lower the throughput. Wider channels lead to more noise and possibly a weaker signal due to CCI in areas where there are multiple overlapping access points.

The 6 GHz frequency band should solve this by introducing more channels and a whole new frequency for data transmission.

If you use the 2.4 GHz frequency band, the general rule is to select non-overlapping channels, namely 1, 6 or 11. With the 5 GHz and 6 GHz band, there are a large number of channels so the likelihood of interference is lower.

If it happens, it might have to do with how much a channel is wide, rather than its number. The wider the channels, the more problematic the connection if there are more access points close to one another, thus producing CCI.

Narrower channels leave you with more choices, which is a better solution in areas where there is a lot of interference. Wider channels give more throughput, which increases throughput (potential speed).

To find the best channel, one can use a plethora of tools available for free on all the popular operating systems, as well as mobile devices, then manually select the suggested one from the router settings.

How to Extend WiFi Range Inside And Outside the House

Having constant internet access is paramount in today’s world. Whether at home or in the office, internet access all the time is almost as mandatory as electricity or water are. Having dead spots and a poor connection can easily be remedied with modern equipment or a little troubleshooting. Alongside gear inspection for possible malfunctions or […]

What Drivers to Install on a Fresh Windows

There is nothing quite as satisfying as installing a fresh new Windows and getting to try new CPU/GPU overclocks and new tweaks for your system. The not-so-fun part of fresh installs though is having to deal with drivers and the initial installation procedures. In truth you can make the driver installation process a lot less […]

No matter how fast your PC is, when infected by malware you will inevitably deal with computer freezes, mouse freezes, crashes, etc. A lot of the issues have to do with your CPU getting bogged down by malware processes that do not allow your system to operate properly. If you are in this situation, or […]

How to Make a Custom Cursor in Windows

If you weren’t born in the 90s you will most likely not even know that at some point in time having a custom cursor for your Windows was a big craze. In games, you can set custom FOV values, resolutions, and even custom crosshairs which will help you with your aim. A custom Windows cursor […]

How to Export, Import, Rename or Delete Power Plans

Power plans are a big part of latency and FPS tweaking and most custom Windows ISOs come with unique power plans. Unlike more advanced tweaks importing a power plan and using it is quite simple and does not take special technical know-how. If you are going to test multiple power plans to see which one […]